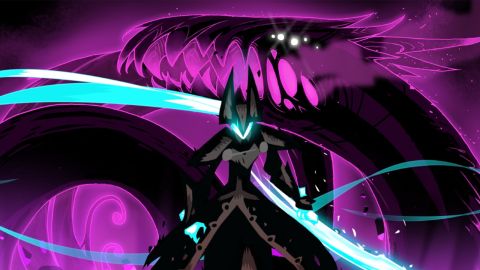 An enticing (if sometimes uneven) action-adventure that will surprise you with an intriguing mystery and surprisingly deep characters.

Omensight from Spearhead Games is a delightful surprise in this day and age - a colorful game with vibrant characters and a story that, while well told, isn't super heavy or trying to make us reflect deeply on Big Important Themes with a stern look on our faces. It wants to make you smile, and laugh, and take you on an adventure. And for the most part, it succeeds.

Cast in the role of the Harbinger, you exist halfway between the Grim Reaper and a Time Lord; you are a sign of the end times, but you're not there to cause the apocalypse, you're there to prevent it. In this case, that means hunting down a priestess' killers. And so you relive the world's final day over and over, using information, clues, swordplay, and bit of light platforming to figure out whodunnit, whydunnit, and how to stop all the dunniting.

Let's do the time warp again (and again)

Being a story that hinges on time travel, there's a lot of revisiting the same levels. That said, it doesn't feel like backtracking - since things in a level will change depending on how you mess with the timeline, it feels like a chance to try new paths, unlock new secrets, and fight tougher enemies. It's more like replaying a level to get a better score than the boring lull backtracking usually is. Loading into an area, even one you've seen before, never feels like a chore. At least until you get to the pain-in-the-ass Imperial Fury level.

In this scenario, you're on top of a massive tank that’s steamrolling its way through a burning forest as it obliterates everything in its way with a large cannon. It's fabulous to look at thanks to Omensight's beautiful visual style and bestows a sense of power as you lay siege to your enemies. It's also very not fun, because at one point, the tank must pass by three groups of would-be saboteurs in quick succession. If one of them reaches a designated detonation plunger, it's back to the checkpoint to start the gauntlet over.

It's misery every time; the camera is too far away to effectively see when an enemy is attacking, too many enemies have ridiculously powerful area attacks, the area is too narrow to make use of movement, and the fighting is too cramped to effectively target exactly who you want. And should a runner reach the plunger, the animation can't be interrupted, so there were far too many moments where I was crying foul. This level is the worst example of a difficulty spike and/or unfair playing field, but there are smaller hiccups as well.

Thankfully, 90% of combat isn't like what I've described above. Most of the time it has a clear flow and challenge that's reminiscent of the Arkham games, albeit a bit more frenetic and button-masher friendly. The animations are smooth and full of flourish, and the Harbinger exudes the type of coolness you felt when you doodled your first original character on the inside of a math notebook. Watching her slice through bad guys is a delight.

Where Omensight really shines are the story and characters. This is a time travel tale that manages to be comprehensible and intricate by centering your decisions not on where you go or when, but with whom. To start the day over, you choose one of the four main characters to accompany, and then see where each new clue you reveal to them leads.

So for example, one day you'll follow Ratika the mouse, and discover she knows something about the murder you're investigating. The world ends, you go back and start the day with Ratika again, but this time start by showing her you know her secret. Now she's compelled to take you somewhere new, which could in turn give you a clue related to the other three.

It's fun to see how each character reacts to your presence, and what you can change about their day. It's also surprisingly linear - I expected to be able to go back to the very beginning if I so chose, but each time I gained a significant enough revelation, the plot advanced and I couldn't choose not to tell companions of my findings. That's not a major knock against the plot, but it would've been nice to remind myself of how much had changed, or re-explore old paths just to make absolutely sure I got every little collectible and every extra piece of lore. This is a pretty interesting world, and I wanted to know more about it.

As for the characters themselves, each sidekick's visual design communicates what you think each of these characters is about, and the story takes several opportunities to subvert those expectations. Look at the bird Emperor Indrik and you'll immediately think you've got him pinned as a no-nonsense, snooty jerk. And when you first meet him, you'd be right. But as you progress and unravel more of your companions' backstories, you'll find they're all far more complicated than they seemed at first glance. It's impressive that Omensight toes the line between looking like a children's cartoon and telling a story with three-dimensional characters that have layered motivations.

A game out of time

If Omensight was a PS2 game, it would've been an instant hit. It feels like an experience that would've been right at home in 2002, alongside games like Ratchet & Clank or Sly Cooper. Of course, it's not 2002 anymore, and so Omensight feels small and uneven compared to the big-budget, AAA, open-world mega-experiences we've come to know.

But if you're looking for something reminiscent of a simpler time, something digestible set in a unique and intriguing world (and don't mind a few rough fights every now and then) there are few games I'd recommend more.

An enticing (if sometimes uneven) action-adventure that will surprise you with an intriguing mystery and surprisingly deep characters.