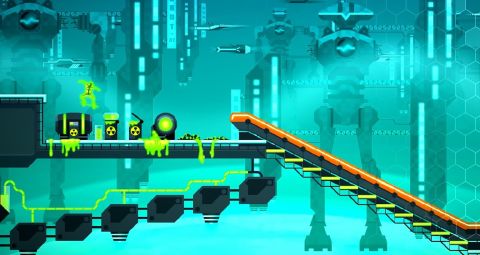 It’s tough, unforgiving and initially overwhelming, but hey, that’s skateboarding. OlliOlli2 is a glorious platform for self-expression when you nail it, but often it's a bit of a grind.

Ok, so you’re tricking over vats of glowing toxic waste, grinding down towering rollercoasters, hopping between aztec monuments, and blasting out of giant gun barrels, but there’s something oddly realistic about OlliOlli2.

The sequel to Roll7’s punishing skateboard-platformer spans five worlds with five levels apiece, and more if you factor in daily challenges and higher difficulties. Beating them is simply a matter of remaining upright until your skater dude reaches to the finish, pops his board into his hand, and gives a cute little two-frame fist pump. But that’s easier said than done with a screaming procession of obstacles twisting your fingers into veiny knots.

Where the original arranged dumpsters, ramps and rails in drab urban environments, its sequel takes a playful approach. There’s a moonlit fairground, infected with pockets of yellow radiation, a perilous jungle filled with spiked traps and tribal statues, and a Wild West with tight caves and dynamite stacks. Particularly impressive is how, despite busy backgrounds where parrots flock, lightning stabs, and steam trains chug, levels remain endlessly readable.

Still, don’t be fooled by the fantasy, because OlliOlli2 is pure skateboarding on a 2D plane, bearing the scuff-kneed, 100-attempt, break-the-board-in-half hallmarks of the extreme sport - except in this world restarts are instantaneous. It transplants the variable analogue stick flicks of EA’s Skate series into a game that at first glance looks too simplistic to deal with its intricacies. What next, you think, Fight Night’s ‘full spectrum’ scheme for Super Punch Out?

You don't have to be alone (for long)

OlliOlli2 doesn't have a multiplayer mode... yet. But split-screen 4-player is in the works. Combo Rush, as it’s known, involves four modes which you can arrange into custom tournaments: there’s racing in which players compete to reach the finish line first, score attack, where the winner is the first player to reach a million points, time attack, where players try to bag the biggest score in a minute, and spot, where players compete to perform their best combo. Expect a free patch to add the multiplayer soon.

This juxtaposition of the progressive and primitive sometimes feels a bit vague, leaving you flicking your thumbs at random angles in the hope your skater does something - anything - constructive with his feet. And there’s nothing more frustrating than pulling off a heelflip motion only for the game to stubbornly ignore you (at least that’s how your brain presents it). But that’s where practice comes in.

Only after completing the - highly recommended - tutorial do you start to appreciate the versatile controls. Ollieing by flicking the right stick down then up adheres to the actual mechanics of the manoeuvre. Different tricks require different spins and nudges - your basic board flip employs a half anti-clockwise motion (or a hadoken, in Street Fighter parlance). Holding a shoulder button in conjunction with the thumbstick opens up a whole new section of riskier showboats such as 540 shove-its and casper flips.

Good grinds meanwhile, start with a well-timed stick flick just as your wheels hit the rail, a press of X and a flick of the stick switching stances and the shoulder buttons again acting as modifiers. Tapping X as you land is the only way to bank these points. New to the series are combo-continuing manuals, triggered by holding back or forward upon impact, and these are wholly necessary to 100% later levels.

When even successfully completing an ollie in the flat ground of the training park without breaking your neck prompts a flutter of excitement, crazy courses that lob the tricktionary at you prove immediately daunting. Your first experience with OlliOlli2 won’t be a fun one. It will be filled with heavy swearing and weary sighs, and you might vow to never pick it up again. But you will. Ignore chasing scores, snagging collectibles, or completing each course-specific task on your first run, and focus on nailing the basics. You know, the things actual skaters worry about, like going forward and not falling over.

Despite initially overwhelming difficulty, the game worms its way into your mind. It makes you want to get better at it, and the good thing is that you can. Once you work within its rhythms, you can start to thread in more advanced techniques. If your grinds are consistently perfect, kickflip between them. Mastered manuals? Throw a revert in there to swell your score. Everybody starts on the same fundamentals before building out from them with creative flourishes of unique self-expression. Lay the bricks then paint the walls. That’s skateboarding.

In getting there, though, OlliOlli2 is a game that demands undivided attention. Sprinters don’t breathe during the 100m dash, and you won’t blink until completing each roughly minute-long course. Beginning a run is like plunging your head underwater, and finishing it is like coming up for air. The experience is so draining that frequent breaks are needed to recharge your batteries, to step away from the game and inhale.

When my instincts started to take over, I realised my eyes weren’t fixed on my character and his fluid tricking (Roll7 talk of having added 9,000 extra frames to his animation) but the centre of the screen, automatically reacting to anything that enters this self-imposed visual radius. It’s like turning off all non-vital organs and diverting blood and oxygen to the eyes and fingers, to the point where if someone comes and asks what you’re playing, all you can say is “Uhhhhhhh.”

The way the scrolling scenery roars relentlessly onwards almost edges the game into rhythm action, forcing you to make snap decisions. That’s where split routes and secret lines come in. They dramatically extend the length of each course (you can easily spend 20 minutes learning one route then 20 on another) and offer much-needed choice.

The good news is OlliOlli2 retains the pure mechanics of skateboarding despite its increased absurdity. The bad news is, just like in real life, skateboarding here is hard, and sometimes the euphoria you feel at the level’s end isn’t worth the grind it takes to get there. It’s perhaps not the best sign when your abiding memories involve wincing as your character twists into a pavement pretzel. Push through that wall though and you’ll find a satisfyingly realistic sports game regardless of those mech factories and piranha pools.

It’s tough, unforgiving and initially overwhelming, but hey, that’s skateboarding. OlliOlli2 is a glorious platform for self-expression when you nail it, but often it's a bit of a grind.