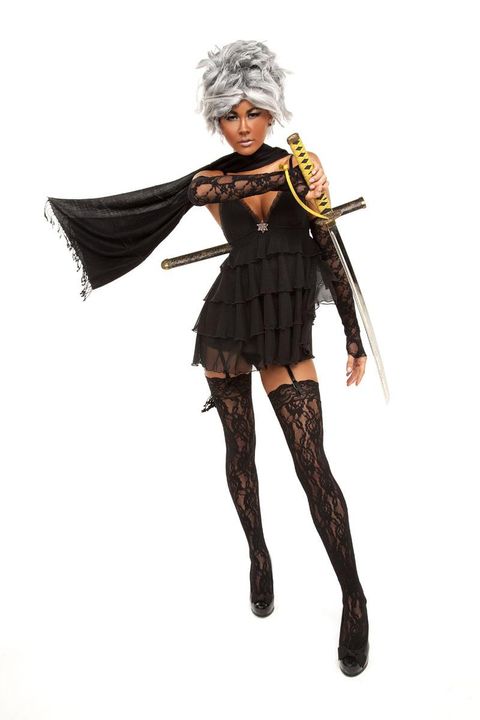 It’s hard to pin down exactly what makes No More Heroes so damned appealing. The combat’s fairly simple and repetitive, the protagonist’s a filthy, selfish idiot who’s always on the toilet, and the plot concerns an association for assassins who apparently have nothing better to do than constantly duel each other to see who’s best. By all rights it should be terrible, but its unique combination of slick cartoon visuals, clever controls, deadpan goofiness, teasing sexuality and over-the-top, cult-film-inspired ultraviolence instead make it one of the best games on the Wii.

No More Heroes 2: Desperate Struggle not only continues that bold tradition, but improves on it, streamlining it into something bigger, faster, smarter and sillier. The action’s more or less the same, with geeky punk assassin Travis Touchdown carving up squads of inconsequential thugs with a Beam Katana, but it’s been refined, with more varied enemies and a more natural feel.

Meanwhile, the first game’s free-roaming segments – during which you could tool around the city of Santa Destroy, Calif., on Travis’s futuristic motorbike – are gone entirely, replaced with direct access to missions, side jobs and other points of interest. Fans of the original shouldn’t worry, though; while it might seem like a big part of the game has been stripped out, the things that replace it are actually more interesting.

Above: It looks like a boring way to get around, but it’ll let you concentrate on more important stuff

First, though, the setup: when we last saw Travis, he’d clumsily murdered his way through Santa Destroy’s criminal underworld, been crowned the world’s greatest hitman and was locked in an inconclusive life-or-death duel with his long-lost twin, Henry. Opening three years later, No More Heroes 2 almost immediately tells us that what’s happened to Travis since then doesn’t really matter. What does matter is that he survived to walk away from his assassin job, only to re-enter the profession after his best friend – Bishop, the guy at the video store – is murdered.

Unfortunately for Travis, his infamous exploits have turned assassination into a huge fad, and so he’ll have to start at the bottom again by killing some douche who’s a dead ringer for Final Fantasy VII’s Cloud Strife.

In this case, “the bottom” means that he’s ranked 51st by the mysterious United Assassins Association, which theoretically means he’ll have to kill his way through 50 unique boss fights if he wants to reclaim his top spot. We say “theoretically” because the “51” is actually just a reference to series creator Suda51; in reality, various plot twists ensure you’ll only have to fight 15 of the bastards, which is still a big step up from the previous game’s 10.

The assassins themselves vary wildly, and fighting them is easily the highlight of the game. They all require unique strategies, nearly all of them are rivetingly chatty and they include weirdoes like a money-obsessed sharpshooter, a singing gothic-Lolita sniper, a floating Cosmonaut backed up by a laser satellite, and a cloyingly psychotic little anime girl. Oh, and these… people:

Of course, to get to them, you’ll almost always have to hack your way through a few dozen waves of their goons first, ranging from skinny thugs with clubs to huge, incredibly tough guys with chainsaws, with plenty of other gun-and-blade-wielding nobodies in between. Like in the first game, combat is deceptively simple – mashing on the A button swings Travis’s Beam Katana, holding the Wii remote high or low determines his stance, and pulling B launches hand-to-hand attacks that can stun blocking enemies and initiate wrestling throws.

There are a few cool additions this time around, though, not the least of which are more powerful, remote-swinging attacks and the ability to switch between up to four different Beam Katanas at any time. Also new are some of the invincibility modes you’ll slip into when you’ve shed enough blood, which now include super-speed, the ability to shoot balls of energy and the ability to run around for a few seconds mauling people as a god damn tiger.

Another interesting change: you won’t always play as Travis this time.