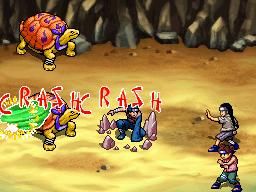 If you%26rsquo;re having trouble keeping track of the zillion or so Naruto games out there - and there%26rsquo;s no shame in it if you are - this is the one that%26rsquo;s a role-playing game with turn-based battles. This obviously has a huge effect on the pace of the game. You%26rsquo;d think a group of ninjas-in-training with all sorts of supernatural powers would need to be all about lightning-fast brawling (and stealth, but these aren%26rsquo;t exactly historically accurate ninjas and that%26rsquo;s a geek argument for another time), but quicksilver reflexes are unimportant here. Instead, what you want is a careful strategy.

Okay, not that careful. While there are more than 30 recruitable characters, your active party is only three characters, plus one alternate and one summonable spirit buddy. So basically, your strategy will mostly consist of hammering the basic attack, squeezing off magic/jutsu moves, and arranging your party members in the squares (your half of the battlefield is a 3x4 grid) least likely to get them kicked in the face. You know, wimpy sissies in back where they get a defense boost at the cost of some offense, spread everyone out if the boss has an attack big enough to hit multiple characters, etc. It%26rsquo;s meant for everyone, so those who%26rsquo;ve played grown up strategy RPGs will probably sleepwalk through everything that isn%26rsquo;t a boss battle. You%26rsquo;ll also get really sick of all the random battles.

One thing folks who played the first path of Ninja might be asking is %26ldquo;where in the Naruto storyline does this game take place?%26rdquo; Fair enough %26ndash; the first game covered about 80 episodes of the anime, which leaves almost 140 to go before you even get to the second, or Shippuden, series. However, the plot here seems to be new, and revolves around a spirit beast that has begun stomping around. Well, sort of stomping. You%26rsquo;ll see.

The point is, like the rest of this game, the story is okay. But just okay. And it only lasts maybe ten hours, though online-enabled multiplayer matches can extend that a bit. And to be honest, without more innovation (sorry, touch-screen minigames aren%26rsquo;t really new) it really doesn%26rsquo;t deserve to be any longer.