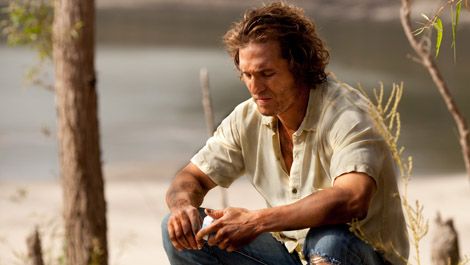 Rather like the ark-esque boat that’s bodged back to life with pinched parts and blind faith at the centre of Jeff Nichols’ story, Mud is pleasingly reminiscent of other sun-dappled, boys’ own adventures that are so evocative of time and place.

Just staring at the screen induces the taste of fried chicken and a sense of sticky heat.

As teen buddies Ellis ( Tree Of Life ’s Tye Sheridan) and Neckbone (newcomer Jacob Lofland) chug up a Mississippi tributary in their flatboat to find a mythical, wrecked speedboat deep in the woods, it’s hard not to think of Stand By Me ; the woozy lensing of beautiful/dangerous Arkansas backwaters by Nichols’ Take Shelter cinematographer Adam Stone recalls Malick; the discovery of a charismatic fugitive, Mud (Matthew McConaughey), coercing the boys into carrying messages to his lost love while stealing parts to re-float his cruiser is Whistle Down The Wind ; the pervading sense of doom and Southern gothic contains a smidge of The Night Of The Hunter .

And, of course, that journey by two boys through a minutely essayed Arkansas (details of a disappearing river community, grubby t-shirted teens at strip malls, Michael Shannon’s hick oyster-diver scrabbling to make a living) is pure Twain.

But that’s not to dismiss Mud as merely derivative. With a lack of sentimentality, the appealingly naturalistic performances of the two boys and a slow-burn build-up to an explosive finale, it’s a charming, redolent and unexpected pastoral that both intrigues and moves.

Much of that is down to McConaughey’s magnetic performance (sans shirt, of course), tying the tale together despite a weird third-act narrative POV switch and sign-posted serpentine disaster.

It’s his grubby intensity that keeps the plot-propelling love story between Mud and his girlfriend Juniper (Reese Witherspoon) alive. It’s certainly not Witherspoon, cast presumably for cache but given, and giving, little more than good hot mess in hotpants.