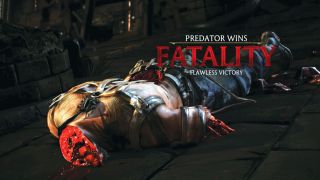 As Editor of Official Xbox Magazine, I’m obviously brilliant at everything. Such as playing games, and lying about being brilliant at playing games. But I’ll admit to one thing I’m not so great at, and it’s suffering fools. Over the years I’ve gradually mastered smiling kindly at idiots, using the sort of rigorous training usually undertaken by monks who seek spiritual enlightenment through hours of meditation. But none of this helps me when a particular topic of debate comes up yet again – the question of whether video games make people violent in the real world.

When this old chestnut comes up in conversation my eyes roll back in my head like a flippin’ fruit machine – and someone is always pressing ‘nudge’. As the brutal fatalities in Mortal Kombat 11 become a subject for debate once again, a recent scientific report has surfaced suggesting that there is no link between violent games and real-life behaviour.

That we’re still having this debate in 2019 is only slightly less disappointing than the fact that we don’t have flying cars and a neon-tinged, if dystopian, cyberpunk existence like in Blade Runner. But, finally, a study by the prestigious Royal Society, the world’s oldest scientific academy, should really put this to bed once and for all.

The report, which to be honest may as well have been authored by a Mr S Holmes, has just examined more than 1,000 teenagers living in the UK and concluded that, despite the concerns of non-gamer parents, non-gamer policy-makers, and The Man, there is absolutely no evidence whatsoever of a connection between violent video games and violent behaviour. No shit, Sherlock. "The results provide confirmatory evidence that violent video game engagement, on balance, is not associated with observable variability in adolescents' aggressive behaviour," the report summarises.

The report does note, “This is not to say that some mechanics and situations in gaming do not foment angry feelings or reactions in players such as feelings of incompetence, trash talking, or competition.” They’re talking about trolls and griefers and people who get salty because they lose. As the report notes, aggressive people might be drawn to violent videogames, and any resulting aggression is more likely because those games “frustrate the basic psychological need for competence”. Which in layman’s terms means they suck at Apex Legends, and behave like massive, angry wasps that can’t figure out glass.

Every single suggestion over the years that a link exists between violent videogames and violent behaviour has been rubbished – the chief reason for this being that none of those claims were ever substantiated with actual, you know, facts. Even back in 2011, the US Supreme Court ruled that “there is insufficient evidence that games cause harm to uphold laws restricting the sale of violent games to minors”. In other words, “Go for it Junior, you’ll love GTA 5.”

And so the Royal Society’s conclusion, that “mere exposure to, and enactment of, putatively violent virtual acts in gaming contexts in aggregate is unlikely, on its own, to bear positively on perceivable differences in adolescents’ aggression in real-world settings”, should, definitively, be that. Sadly though, when the next game pilloried in the red-tops due to its popularity and/or inclusion of guns, knives or spine-extraction comes along, like Mortal Kombat 11 ill-informed media ‘pundits’ will stiffen up again like a wind-sock of hate on a blustery day.

Oddly, as we speak, the biggest complaint – or rather, the most-visibly-manufactured outrage – about Mortal Kombat 11 so far has been from a noisy subset of gamers / YouTubers about Jax's virtuous Black Panther-inspired ending, which PC Gamer suggests is actually popular among most MK11 fans.

At the same time, the Royal Society also found that “death metal fans are nice people” (an actual quote), in a study that played Bloodbath’s cannibal-themed death metal song ‘Eaten’ to one test group, and Pharrell Williams’ ‘Happy’ to another, while using ‘binocular rivalry’ – a violent image and a neutral image presented simultaneously to each of the test subject’s eyes – to see how they processed the images. Both groups had the same non-sociopathic responses, although one group was later found to have had Pharrell Williams’ maddeningly upbeat tune embedded in their brain for the rest of the day.

Read more of Chris' game-related musings every month in Official Xbox Magazine, and follow us on Twitter @oxm.