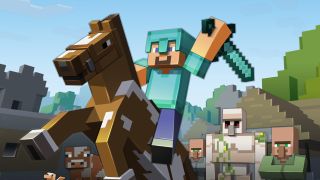 The major graphics overhaul for Minecraft that was announced back in 2017 at E3 is officially canceled, according to a statement released by Mojang. The Super Duper Graphics Pack was meant to drop in the fall of 2017, and was going to overhaul the textures and visual effects of Minecraft.

When it didn't drop in 2017, it was delayed until 2018, but never came, and fans were left wondering when they would be getting it. The Super Duper Graphics Pack would have run in 4K on the Xbox One X - a big deal since Minecraft is the only first-party Microsoft game that doesn't have upgrades for the console.

Mojang's statement suggests the technical requirements to successfully make and run the super Duper Graphics Pack across platforms was its ultimate demise. It says, "Super Duper was an ambitious initiative that brought a new look to Minecraft but, unfortunately, the pack proved too technically demanding to implement as planned. We realize this is disappointing to some of you – there was a lot of enthusiasm for Super Duper from inside and outside the studio – but unfortunately, we aren’t happy with how the pack performed across devices."

A spokesperson from the studio reached out to Kotaku via email, stating they had "tried to solve Super Duper for a long time" and that they were currently exploring alternative options with their Render Dragon graphics engine.

It's a disappointment for fans of Minecraft looking for a visual upgrade, but considering there hadn't been any news since last year, is it all that surprising?

Minecraft is still hella fun. Check out our list of Minecraft cheats to help you achieve crafty success.