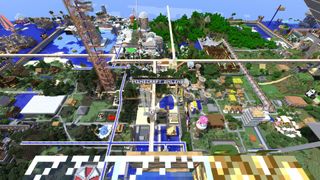 It is believed that the term ‘Freedonia’ was first used by 18th century Americans in the aftermath of the War of Independence, as a colloquial (and rather on the nose) nickname for their newly liberated nation founded on the principles of freedom and equality. Almost 250 years on, and America is now called, well, The United States of America, but Freedonia lives on as a favoured name for fictional countries and non-existent nation-states everywhere, including that of the world found in MinecraftOnline; the oldest server in Minecraft history.

Created within the first hour of Notch opening up Minecraft to the online community on August 4th, 2010, MinecraftOnline is a living museum to over seven years of block-building history. What’s more, it hasn’t been reset once, and the server remains open to the public to this day, which makes exploring its emporium of wonders an experience like nothing else I’ve ever seen as a long-term Minecraft player.

The journey to Freedonia requires booting up version 1.7.10 of Java Minecraft, and typing in the server’s IP address. Once in, you’ll find yourself standing before a great hall of many corridors, with each branching pathway representing a language of choice for new visitors, including Turkish, Dutch, Spanish… the list goes on.

Already, I can sense the dedication to an inclusive and welcoming atmosphere, with an introduction that makes you feel as if you’re about to enter some sort of theme park or visitor attraction. And that really is the best thing you can say about Freedonia. It’s like exploring a virtual, sprawling version of Disneyland, with tours, visitor centres, shops, casinos, a variety of uniquely themed towns, amazing community structures and a wealth of other things to see and do.

Like that of a museum, though, Freedonia has a strong ‘look but don’t touch’ policy when it comes to interacting with its more historic landmarks, and any tinkering to constructions made by other players is strictly prohibited. That’s not to say you can’t contribute to the world itself (though you may struggle to find a single plot of empty land until you reach the outer edges of the humongous map), but vandalism or griefing can result in a hard, permanent ban. Anna, an administrator for MinecraftOnline, talked to me a little bit about what it’s like to maintain Freedonia’s integrity as a living, evolving monument to Minecraft history.

“The main thing that stops players from vandalism is the strict rule of no griefing, and the fact that bans last forever and do not expire over time,” she explains. “Though on rare occasions players can successfully appeal their ban to an administrator in our IRC.”

So Freedonia, despite the semantics of its name, does have its own set of rules and laws, but only out of a necessity to preserve its collection of in-game antiques. The total number of bans, at the time of writing, currently sits at 22216. That might seem high at first glance but, considering the age of the server, it speaks to the committed efficacy of MinecraftOnline’s professional moderation team in protecting the law-abiding Freedonians and their creative accomplishments from harm.

“In general the community is very friendly and interactive”, Anna tells me. “Players travel across the map to build towns together, and players who aren't so nice usually do not stay long, either leaving or becoming banned because they don't care to follow simple rules.”

After taking the in-game tour of Freedonia, which transports me to various observation points peppered across the landscape, I teleport back into the main spawn area and head inside the visitor centre, but not before gaping at the giant Pac-Man statue sat right in front of me. I find out later that, in the grand scheme of things, that Pac-Man is just a small yellow blip on a much larger and richer tapestry of creative works.

MinecraftOnline is unfathomably big. Just take a look at its live map and try to comprehend the densely packed magnitude of it all. Taken as a whole, Freedonia can almost be overwhelming for a passing visitor but, thankfully, the world boasts a comprehensive infrastructure of railway, road and sea networks that connect all of its biggest points of interest together, and walking to the more hidden gems from each main hub is easy enough thanks to helpful signposting.

I make my way to Grand Freedonia Station and take the train towards a popular tourist destination: Lava Town. As a frequented public transport user, I’m especially impressed by the London Tube-style map on display at the ticket booth, which shows me exactly which routes and connections I need to take to get there.

Besides its geographical enormity, the history of Freedonia is also a grand story steeped in the lore and mythology of the people behind its creation. Lava Town, for example, is the supposed birthplace of the Freedonia railway, Pigchinko (a popular Freedonian pastime), and Skypixel - a famed MinecraftOnline administrator and the chief “purveyor of ShyPixel Bakeries, Freedonia's leading chain of stale, moldy bread vendors.” More importantly, however, it’s also an imposing fort built upon the foundations of a lava-spewing mountain. This is definitely one of my favourite spots so far.

Lava Town is just one attraction out of hundreds found across Freedonia, including Drum City, Catville, Pokethedral, the Temple of Supreme Fishiness, East Austania, Floatania, and the Craftbook Museum, to name just a few. But where did this all come from?

Every world has its origins in something or someone, after all, and the founding father of Freedonia is a developer by the name of Eugene Hopkinson (you can check out his latest game, sphereFACE, right here). Anna was kind enough to point me in the direction of his online whereabouts, allowing me the chance to have a chin wag with a virtual god, though he’s far too modest in real life to identify as one.

“The idea behind MinecraftOnline has always been to provide a neutral space that encourages more intelligent players to express themselves and play in whatever way they want, without pushing any kind of doctrine or forcing any particular kind of gameplay”, Hopkinson tells me. “We started very early with the understanding that the core game was fundamentally flawed for public multiplayer - if players could get away with destroying the work of others, they often would choose to do so, so we had to address that first of all.”

This is how Freedonia’s system of human moderation came into existence, which ensured that players were treated fairly (no autobans) while simultaneously being held accountable for their actions. The permanence of a ban was also important for Hopkinson, as “having a punishment as temporary makes it clear that it is a game [...] where you're continuing to engage with them and they're continuing to play with you.”

If it sounds like Hopkinson had a distinct, long-term vision for MinecraftOnline, the reality is that he had little idea of how big and lasting a world Freedonia would go on to become. “When I started it, I expected it to last maybe a year or so before the main Minecraft game caught up with our changes. But there seemed so few other servers being run in a professional way and catering to a more emotionally and intellectually mature player base.”

Speaking to him, it becomes clear that Hopkinson and his team continually adapted MinecraftOnline to make up for what they perceived to be Mojang’s failures, not to mention the studio’s tenuous early relationship with its own community. Aside from that, the fortune of leading a team of administrators and moderators with sound experience in computing and server management allowed Hopkinson to expand Freedonia into a long-term project, with goals well beyond what he had initially envisioned for the world.

“MinecraftOnline’s become far more popular than any of us ever expected, so I don't think we can realistically predict what will happen next.  We're not actively working hard on growth because we're happy with our core community as is - but as long as there's demand for the particular flavour of gameplay we provide, we're still going to be here. The server is entirely volunteer run, and funded by player donations, so there's obviously enough demand to keep it running as is.”

It’s strangely heartwarming to know that the oldest Minecraft server is also one which represents the very best of what the game can be. An inclusive, active community of builders and benefactors, a positive space free from harassment or any notions of toxicity, and an extraordinary playground of sights and sounds, continually flourishing under the creativity of its inhabitants. In Minecraft years, Freedonia is practically an ancient civilization. Spend just five minutes soaking up its awe-inspiring surroundings, however, and you’ll soon see that it is anything but antiquated.