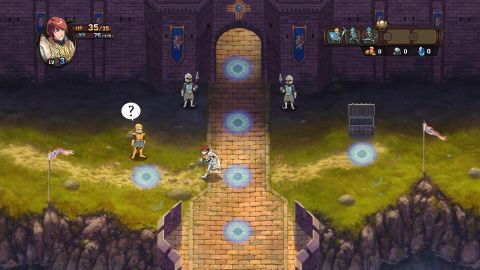 As a follower of Might and Magic, you probably fall into two categories. Either you%26rsquo;re maturing in years and wistfully remember first-person dungeon crawling and four color graphics, or you%26rsquo;ve invested countless hours strategizing with grid-based, turn-based combat. Might %26amp; Magic: Clash of Heroes is neither. Well, that%26rsquo;s not completely true; you%26rsquo;ll spend much of your time with familiar Heroes of Might %26amp; Magic-style top-down exploration. Here, you unravel the story, collect resources, recruit troops and pick up combat-boosting swag.

The big difference (cutesy Japanese RPG graphics aside) is with the combat. Like the equally addictive Puzzle Quest, the key is matching three of a kind. You and your opponent have a stack of troops on each screen; join three of the same color vertically and they%26rsquo;ll combine and charge up. Match three horizontally and they%26rsquo;ll form a protective barrier. Once their charging countdown has elapsed over a set amount of turns, they%26rsquo;ll launch an attack. Any attack points left after plowing through enemy units (or walls) will reduce the hitpoints of the opposing commander.

It%26rsquo;s simple but compulsive stuff. Forming a three-man unit is easy enough; the trick is launching them from the right place in the screen, charging up larger troops (%26lsquo;champion%26rsquo; units like dragons and mages require several smaller units to activate) and having enough defensive troops in place to soak up enemy attacks. Might %26amp; Magic: Clash of Heroes is a devilishly addictive game that blends RPG and puzzle elements into one deep, devious and delightful package. Love it.