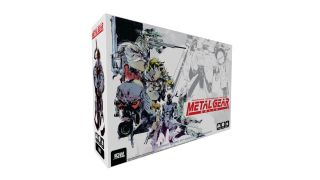 Did you know that a Metal Gear Solid board game is on the way, one that adapts the plot and setting of the original game for four-player cooperative play? Well, it is, but it's also been delayed into next year from its original 2019 release date. On the one hand, that means you won't be able to pick it up in time to enjoy tabletop tactical espionage action with your friends and family over the holidays. On the other hand, that means you have a little longer for your bank account to recover after all those Cyber Monday game deals.

IDW Publishing, the company behind Metal Gear Solid: The Board Game, explained the decision behind the delay in a blog post. IDW says fans enjoyed pre-release versions of the game at public demonstrations, but a number of issues and potential improvements surfaced; IDW either could have fixed some of them and made its original release date, or gone for a delay to polish everything up as much as possible. It went for the latter, pushing the planned release date to summer 2020.

What will you get for the wait? On top of a refined play experience, IDW says it's adding more than 100 pages of comic book art to the campaign book, helping all 12 replayable scenarios feel even more Metal Gear-ish. The grandest surprise of all is the debut of two cardboard box minis.

The standard version of the game will use tokens to represent those most adaptable of stealth containers, but Day One customers will get minis. That's on top of day-one exclusive minis for the tank, Hind-D helicopter, and fist-fightin' Liquid Snake. Everyone who purchases the game will still get a bunch of minis, including plastic representations of Genome Soldiers, Foxhound bosses, and the four playable characters - Solid Snake, Meryl Silverburgh, Hal "Otacon" Emmerich, and Gray Fox. You can pre-order your day-one copy for $109 right now if that sounds like your cup of nanomachines.

“I’m probably the biggest fan of Metal Gear Solid. Ever since playing the first Metal Gear Solid, it has forever altered the way I view games," board game designer Emerson Matsuuchi said when the product was first announced. "The story it told was so memorable and the gameplay experience so rich that it has shaped my expectation of games as both a designer and gamer. So the opportunity to bring this masterpiece to the table has been an honor and dream come true. I’m excited to be able to capture the tactical stealth action that is the hallmark of the franchise as well as create a new experience and story for the Snake fans. Age hasn’t slowed him down one bit.”

Explore more cardboard worlds for less with our guide to Cyber Monday board game deals.