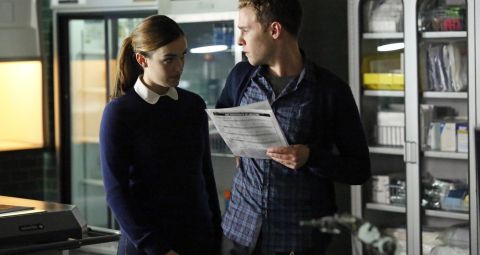 Episode two of season two also feels like the second part of a two-part story. So while there’s a lot to enjoy, there is a slight feeling that the previous episode had all the exciting major new revelations to deliver, while this episode is more of a plot-driven exercise; the last act in a film, or – less glamorously – a bit of necessary housekeeping.

But this is housekeeping at the extreme ironing end of the spectrum. And once the chores are done, there’s 10 minutes of downtime for recreational arc-plottery: art (Coulson’s alien graffiti), badinage (Coulson and Talbot’s face-off) and games (Skye’s dad playing Dare with Raina to pick up the Obelisk). This is the first chance we’ve had to savour genre legend Kyle MacLachlan as the “Doctor” (the tools of his trade ominously on display at one point). It’s a brief appearance but already he sends chills up your spine.

Mostly, though, the episode is a big, action-packed chase with a side dish of double-dealing, thanks to Hunter. The new guy is less irritating this time, though he’s still more the kind of hyperactive mate who makes you laugh down the pub, rather than someone you’d want to spend your life with. He mentions his “psychotic ex-wife”, and you have to wonder whether it was all the constant quipping that sent her psycho. (She was also, apparently, a close friend of Hartley’s, so maybe she was at the funeral, in which case that was another reason for Hunter to keep his distance). Hunter’s warm chat with Skye, though, (“SHIELD’s not your life, it’s just a job,” to paraphrase) goes a long way towards humanising him.

This diner in Santa Carlita has appeared in dozens of films and TV shows, including Heroes, Melrose Place, Studio 60 On The Sunset Strip, Numbers, CSI, ER, Angel, Hyperion Bay, The King Of Queens, Sons Of Anarchy, Diagnosis Murder, Monk, Space Cowboys, Lost In America and Every Which Way But Loose. It was also the place where Tim Robbins told Jack Black how to steal the magic pick in Tenacious D In The Pick Of Destiny.

Coulson’s sudden decision to sign Hunter to SHIELD at the episode’s end remains bizarre, though. Despite all the reasons Coulson gives (it sounds like he’s convincing himself) the fact remains that on the mission just completed, Hunter acted like a dick. Okay, “easy-going” is part of Coulson’s shtick, but a glib warning about May savouring a grudge feels a bit lame. Going by all the evidence we have, Hunter is a loose cannon, and his new comrades should be concerned about that, not treating the whole thing like a game.

Another plot strand that feels a little contrived is Fitz’s mumbling about, “I didn’t solve this today.” There’s a big difference between forgetting words and speaking in Middle-earth-style riddles. This feels like a massive deterioration into a whole new area of mental illness, which would be shocking except that it’s clearly a mere conceit created for plot purposes. It’s a shame, because Iain de Caestecker is acting his little heart out.

It’s good to see Mack making an impression this episode, too; the inference seems to be that because he didn’t know Fitz from before, he isn’t expecting the impossible from him, and is therefore treating him more like a normal human being than his old friends are. The resulting Fitz/Mack scenes are actually rather sweet.

But the action scenes are impressive, and though there’s a feeling we’ve seen Creel at his best already last week, the final fight remains a highlight. There’s also a pleasing new trend in telling the story visually rather than spelling everything out; Bakshi’s brief scene where he zips up a body bag while on the phone tells you everything you need to know about HYDRA’s clean up operations.

“Heavy Is The Head” is slick, witty, fun and so nearly a four-star episode, but suffers a little from feeling like it’s maintaining a holding pattern, rather than building on the promise of the season premiere.

Here’s a lovely slo-mo tracking shot on the bullet, with some great FX of Creel transforming into a real hard guy (he’s wearing the Carbine ring, which is why the armour-piercing bullet doesn’t work).

Agent Carter made another cameo this episode, though it was very fleeting.

Imaginary-Simmons seem to be very impressed with Mack’s muscles. “You know, I like him,” she says with a glint in her eye. Considering she’s a manifestation of Fitz’s subconscious, what does this tell us about the brain-fried boffin’s libido? Interesting…

Something was nagging us about the FX shot of the Bus and the quin jet flying off at the end of the episode. Superficially it’s a fine shot, as this screengrab attests. But something was… off. It took a few viewings until we realised that the tree remains completely still even when the quin jet swooshes right past it. We can’t blame the production team; it was hardly worth hiring a wind machine just for that extra bit of realism. While we’re on the subject of the ending, surely Talbot isn’t stupid enough to fall for Coulson’s bluff. He knows that one of his quin jets is missing, and that SHIELD must have nicked it. He’s naturally cynical enough to put two and two together and go, “So, you’ve got two aircraft now, and cloaking tech – how do I know that isn’t all you’ve got?”

Admittedly, we might be reading too much into this next observation (because nobody in the show mentions anything), but after Bakshi mumbles his voodoo that allows Creel to rid himself of that Obelisk infection on his arm, Creel attacks Hunter and what looks like a piece of the Obelisk manifests in the palm of his hand. And when Coulson defeats Creel using the Overkill Device it looks like Creel’s body mutates into the same rock-like substance that kills people who come into contact with the Obelisk. So has Creel become a living manifestation of the Obelisk? Probably not, as if SHIELD suspected he had, surely they wouldn’t have handed him over to Talbot. On the other hand, Coulson gives us a great big hint that Creel isn’t dead, so he’s clearly destined to return to the show at some point.

Marvel’s Agents Of SHIELD airs on Friday nights on Channel 4 in the UK and on ABC on Tuesday nights in the US.