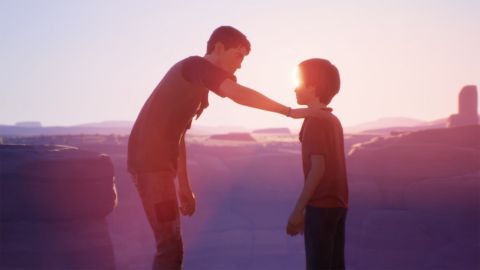 Verdict: "The best episode of Life is Strange 2, with some lovely character moments, a decent cast, and a welcome twist to the always excellent soundtrack."

Life is Strange 2 is at its best during small, intimate moments. And episode 3 is packed full of these, only going big on the ‘action’ towards the end of its 4-hour runtime. As such, this is probably the most entertaining episode of the sequel; a slice of game that allows the characters to have a little fun, and develop their personalities, without the constant pressure of life or death decisions and branching paths trying to inject a sense of urgency. It’s fitting then, that Life is Strange 2 episode 3 is set inside a hippy commune, several months after the climax of episode 2.

Minor spoilers ahoy, but Sean and Daniel have conveniently caught up with Finn and Cassidy, the two buskers they encountered in the last episode. They’re living in a camp in the woods, and have found some kind of employment which is actually providing a little stability. That’s all I’ll say. While we know the peace will be fleeting, this settled life allows us to really explore the brotherly bond between Daniel and Sean, and actually let them express their wants and needs beyond ‘not getting caught’ or ‘not starving to death’. While those basic urges run through ep3, they’re background noise, and the game has some fun with more relatable issues. What happens when Daniel finds another brother figure to look up to? How does Sean deal with his inevitable crush on Cassidy? And how do the brothers begin to fit in with groups again after being reliant on each other for so long? This episode has much more of an intimate, real-world feel, and it’s all the better for it. Life is Strange is always at its best when dealing with smaller dramas, which then impact a grander narrative. Even Daniel’s mysterious powers largely take a backseat here.

The supporting cast are a grab-bag of alternative stereotypes, some more convincingly written than others. Finn is perhaps the best, his hippy lifestyle as authentically presented as the slight air of hypocrisy that sits just beneath it. If you think he’s too perfect a free spirit to be a decent character, you’re probably right, but his arc is extremely well crafted. Cassidy too is more than just a wide-eyed love interest for Sean, and there are subtle emotions at play underneath her bravado. The only unrealistic beat, actually, is the fact that it’s never really explained how Sean and Daniel hooked up with the group after leaving Beaver Creek in the last episode, and somehow ending up in California. Other campers at the site barely develop, and can only really be remembered by their strongest trait – there’s a Swedish couple, a guy called Penny, another woman who isn’t the love interest, and a reformed religious devotee.

They all come together in a neat group, however, and this episode of Life is Strange 2 manages to blend storytelling with interaction superbly well in a number of scenes, where everyone is chatting and bickering. There’s an inevitable, but extremely charming scene by a campfire, where that awful drawing mechanic from the first episode returns… except here it’s interspersed with conversation, so Sean talks and responds as he draws. It’s a neat way of masking something dull with what Life is Strange is best at. In fact, there are several instances in this episode where the game mixes its various gameplay systems to try and keep things fresh, and it’s all the better for it. Someone at Dontnod has clearly been playing the cannery scene from What Remains of Edith Finch, as it captures that vibe perfectly.

Because the playing area is so small, there’s also less aimless wandering. While the intention with Life is Strange 2 was to create more scale, the sense of a larger journey, it’s actually a far better game in enclosed spaces, where you’re exploring and talking rather than pushing physically forwards. Variety is added via multiple locations, and a cute flashback sequence, which reiterates the relationship between the Diaz brothers and lets us spend a little more time with their father. Nothing groundbreaking or revelatory here – it’s all about character development and foreshadowing, a storytelling mechanic that Life is Strange has always excelled at exploiting.

It’s not all sunshine and guitar-sessions by an open-fire, though, and some aspects of episode 3 fall into old traps. The climax feels a little forced, as if the game needed everything to happen in a certain way in order to set-up episode 4. Suddenly, some of the decisions made available to the player either don’t make much sense in context, or the outcomes are vaguely unrealistic. Having spent so much time and effort crafting characters and relationships, Life is Strange 2 always tends to struggle with cause and effect. Perhaps that’s the difficulty of crafting a character-driven game that allows the player any kind of agency, but for the most part the original game and Before The Storm gets the balance just right.

Presentation remains top-notch, however. While there are a few weird moments where some characters appear to be trembling for no real reason, the animations and facial expressions are pretty good. The soundtrack, always a highlight, takes a slightly different turn here. There’s more of a retro-pop vibe than the usual singer-songwriter melancholy, and it’s a welcome change of pace, adding a sense of adventure and whimsy to otherwise mundane situations.

Overall, episode 3 is a good one. There are far more charming moments than dull missteps, we learn more about the Diaz brothers and their supporting cast, and there’s just enough interactivity to keep things interesting throughout. It’s an episode with heart and brains in equal measure; one which rarely tries to do too much, and instead revels in the slower pace its story allows. In other words, if you’re a longtime fan of Life is Strange, you’ll really enjoy this one, because it’s the game at its best. Mostly.

Turn to page three for our Life is Strange 2 episode 2 review...