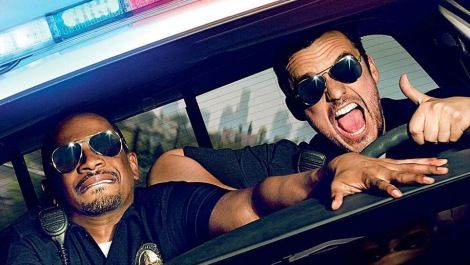 Sometimes it pays to be simple. Case in point? Let’s Be Cops , a buddy comedy that takes one neat idea – wouldn’t it be cool to act like a cop? – then knocks it out the park. Located a couple of doors down from 21 Jump Street , Luke Greenfield’s caper also recalls the infectious recklessness of Catch Me If You Can and Kiss Kiss Bang Bang , other films that hang on the notion of reinvention through deception. In New Girl actors Jake Johnson and Damon Wayans Jr., meanwhile, it boasts an instantly winning double act that, at its best, recalls the lightning-in-a-bottle chemistry of Mel Gibson and Danny Glover in the Lethal Weapon series.

Ohio natives in Los Angeles, Justin (Wayans) and Ryan (Johnson) have both reached 30 with sod-all to show for it. A timid games designer forever shouted down at meetings and a directionless loser living off the proceeds of a genital herpes ad, they’re both in a rut and they know it. Until, that is, they attend a costume party in borrowed LAPD uniforms and find themselves noticed, respected and hit upon for perhaps the first time in their lives. (“Even the cops think we’re cops!” marvels Ryan after their ruse is swallowed by the neighbourhood fuzz.)

Justin’s happy for this to be a one-off. Ryan, though, can’t let it go, buying an old squad car off eBay in order to continue the subterfuge. The trouble starts when he and his ‘partner’ fall foul of an Albanian heavy (quite the transformation for Britain’s James D’Arcy) with designs on a local eatery whose pretty waitress (Nina Dobrev) Justin has fallen for. Somehow, a fake gun and a selection of police slang learned from YouTube just aren’t going to cut it…

One naked perp, a hit of crystal meth and a couple of shoot-outs later, the only thing missing is a sequel. Given the limitless number of occupations our heroes could pretend to have next, it surely won’t be long before that’s rectified.