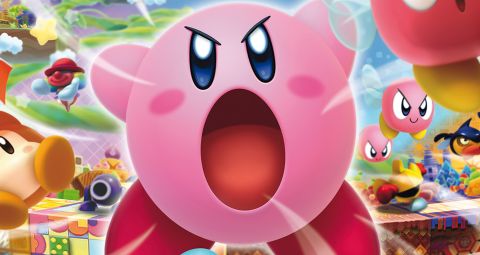 Try to ignore the stigma attached to this phrase: Kirby: Triple Deluxe is a straight platformer. It represents everything you’d expect from the genre, sticking two pink, sugar-coated fingers up at the rest of the gimmick-obsessed industry. Kirby walks, runs, and jumps through beautiful, vibrant 2.5D worlds so happily, you won’t care. Stigma be damned.

Over-familiarity would definitely be a problem if it wasn’t for Kirby’s trademark ability: He sucks. No, he literally sucks. He sucks so hard he can fly indefinitely by inflating like a balloon (leaving you with absolutely no excuse for pitfall deaths), but he also takes on the characteristics of any themed enemies he inhales. This is beautifully implemented, as almost all of the 24 abilities have complete, versatile movesets. All but the one that's just a single-use bomb. No, that’s not very useful.

Not only are these abilities entertaining to try out, they also create new opportunities for skillful play. The flame power-up works as a flame-thrower or a flaming dash, the ninja can stick to walls, throw shurikens and use a sword, and the bell can be used as a melee weapon or invincible shield by crouching under it until it’s safe to come out. The variety offered by these power-ups keeps the game feeling fresh for a good seven or eight hours. Combine these abilities with some very clever level design, and you’ll spend even longer hunting for cleverly hidden collectibles.

The most important of these are the Sun Stones, which are used to unlock bosses and EX stages, meaning you’ll have to start playing smarter if you want to reach the next area. It would be useful if you could carry an ability in reserve (as is possible in recent Mario games), but the reserve spot on the touch screen is used solely for spare health bonuses. Boo and, indeed, hiss.

In fact, the whole game hinges substantially on your personal desire to find and collect everything hidden around the levels. There are 100 Sun Stones to discover and 252 Keychains (though you can buy keychains with Play Coins too), and the game’s challenge lies mostly in sussing out where these collectibles are likely to be and then manipulating the situation to allow you to obtain them. This again highlights the depth of the abilities system and requires forward-planning as well as dexterity. It may not be a revolutionary premise, but it’s cannily-designed and rewarding.

Remove the secrets from the equation and the main level paths are too easy, which becomes increasingly disappointing. The opening levels’ simplicity can be excused because you know--or you think you know--that the later levels are bound to get more complex. And while they do to some extent, very few levels in the main mode pose a genuine challenge. Instead, it’s just an enjoyable journey that opts to entertain you rather than seriously test your skills… that is until you reach the final stretch.

Sadly, when the challenge finally ramps up right at the end, that’s also where Triple Deluxe runs out of steam. Some eight or nine hours in, it starts recycling bosses, levels and ideas, which is a real surprise after the effortless creativity demonstrated in the preceding play. And when the main game is over in 11-12 hours, that means there’s a significant chunk of game in there that isn’t up to scratch. Sure, once you’ve done it, you unlock the post-game content, which is a substantial reward, but that doesn’t excuse the dip in creativity. The game is long enough anyway; it doesn’t need the recycled bits.

While the final world’s focus on bosses is definitely harder than the preceding bulk of the game (approaching mega-frustration on the final section), fighting them again highlights how unrefined the boss fights are, perhaps because they have to work against so many attack types. For example, the outwardly-varied Mr Frosty, Flame Galboros, Gigant Edge, and Blocky may as well be one generic character if you’re using the flame. Some other bosses, such as the flying paint witch, lava-dwelling toad, and segmented salamander, demand more thought, but the majority are relative non-events. They're still lovely to look at, though.

At least the post-game content is strong. The boss-run Arena is Streetpass-enabled, allowing for fastest time battles with your friends (and strangers), plus you can play through the game again as a second character. Be warned, however, the boss run is very easy for 10 minutes, then extremely hard as you go up against the final bosses again. And death means starting again from the beginning of the run, which is very frustrating.

Besides the Story-shaped main event, there’s also a rhythm action side-game named Dedede’s Drum Dash. Surprisingly, this transforms from an ultra-easy, easily-dismissed curiosity into one of the most hardcore gaming experiences I’ve ever played. It demands timed back-beat button presses and super-fast decisions as you bounce on drums while collecting musical note icons and moving towards the goal. Again, it only really gets hard on the final level, with little middle ground between super-easy and ultra-difficult.

Finally, there’s Kirby Fighters. This mode is available from the start and is literally a Kirby version of Super Smash Bros, complete with chaotic four-player action. Granted, everyone has to be Kirby (just wearing a different hat), but the selection of ability types make for a decent--if unbalanced--roster of fighting styles. Sadly, that is the only multiplayer fun you’ll be having in Kirby: Triple Deluxe. The story mode is strictly single-player only, meaning fans of Magic Mirror might be disappointed.

Kirby: Triple Deluxe is a fundamentally enjoyable package. The production quality is sky-high, the treasure hunt aspect well played, and the moveset(s) expansive and versatile. The post-game content and side-modes give this game plenty of longevity too, provided you don’t suffer Kirby fatigue, which could happen given its constant barrage of whimsy. Its relative shortcomings are softened because the core experience is such a pleasure. Kirby: Triple Deluxe is yet another quality platformer from Nintendo and is worthy of your time and money. Even though it’s ‘just’ a platformer.