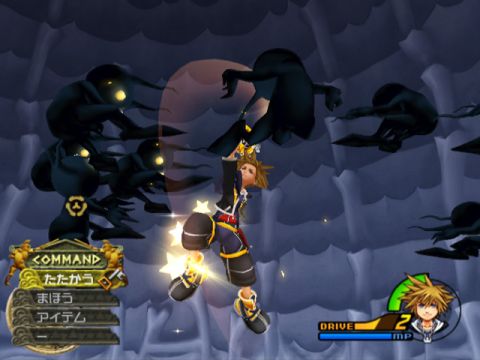 We're still amazed that Kingdom Hearts even exists. An action RPG that casts Goofy, Donald Duck and now Mickey Mouse fighting through multiple Disney worlds? Along the way, they interact with new characters and villains created by the developer/publisher of the Final Fantasy games?

This should never have happened, but it did. And it should never have been brilliant, even magical, but it was. So is this sequel, actually the third game in the series, after the PS2 original and Kingdom Hearts: Chain of Memories for Game Boy Advance. It's a whopping, 30+ hour fantasy epic filled with familiar gameplay:evilcritter thwacking, spell-casting and Disney universe-touring.

Or is it? KH2 actually makes some big changes; most of which involve clubbing bad guys. The first game's mind-numbing scavenger hunts are out - there's not a Dalmatian puppy or Trinity Mark in sight - but a heavily retooled combat system is definitely in.

Almost every level is home to a new character who subs in for Donald or Goofy, be it Simba, Tron, Beast, Mulan, Jack Skellington or another. Still more can be summoned for brief cameos: Chicken Little, Genie, Stitch and Peter Pan. Most of those folks come with special team-up moves they can do with Sora, such as Mulan's dragon-powered meteor storm of blazing fireballs, or Stitch's oddly dangerous ukulele strumming.