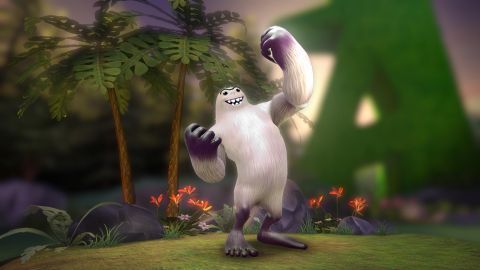 Kinect%26rsquo;s pack-in title immediately scores big points for not being another been-there-flailed-that sports entry. By now most fans of motion-controlled gaming have already bowled, tossed, hit, kicked, and paddled their way through more fake sports than they can shake an invisible racket at. So, Microsoft was smart to sell Kinect Sports as a stand-alone entry and give gamers a fresh reason to get off the couch with the bundled Kinect Adventures. Additionally, the family-friendly title serves as the perfect intro to the new sci-fi-like tech, teaching early adopters how to use the hardware through simple, fun challenges.

Before jumping into the controller-free antics, Adventures draws you in with its pleasing outdoorsy aesthetic. Green mountains, blue lakes, towering pines and log cabins support a scenic, national park-esque style that the chubby boy scout from Pixar%26rsquo;s Up would feel right at home in. Toss in your own customized avatar for a little personalization and you%26rsquo;re good to go. When you%26rsquo;re all set up and have finished ogling the pop-off-the-screen presentation, you%26rsquo;ll want to dive right into Adventures%26rsquo; five main activities - Rally Ball, River Rush, Reflex Ridge, Space Pop, and 20,000 Leaks.

The first, Rally Ball, forgoes any real skill in favor of getting you comfortable with Kinect. Placed at the end of a Plexiglas-looking tunnel, you%26rsquo;re tasked with hitting targets at the opposite end with rubber balls. Once you hit a ball - which, by the way, perfectly captures the ear-pleasing %26ldquo;thwack%26rdquo; of swatting a grade school kickball - you keep it in play with frantic kicks and smacks, trying your best to aim at targets. Bonus balls, such as ones that multiply into threes or catch fire, add some variety, but for the most part this one%26rsquo;s all about familiarizing yourself with the limb-waving tech.

River Rush, on the other hand, requires much more precision and provides Adventures%26rsquo; absolute best activity. Standing upright in a rubber raft, you steer by stepping left and right, and jump by, well, jumping. Navigating the rapids, pulling jumps and stunts, and gathering collectibles requires a good handle on the controls. Thankfully, intuitive responses to your actions effectively immerse you in the rapids-stirring action. Gathering a believable sense of speed while racing down the roiling courses further sells the experience.

While River Rush is the most Kinect-worthy ride in this compilation, Reflex Ridge is a close second. Set up like a Survivor challenge without pain-in-the-ass Jeff Probst taunting you, it has you jumping, ducking, and dodging through a moving obstacle course. It keeps you on a more structured path than the more seat-of-your-pants river rafting, but it too effectively teaches you basic Kinect moves while making you feel like you%26rsquo;re actually in control of the action.

Space Pop and 20,000 Leaks are simple, object-targeting challenges that are more fun than they have a right to be. The former has you popping bubbles while you flap your arms like a bird to stay afloat in zero gravity conditions, while the latter has you frantically plugging leaks with your hands and feet in a cracking fish tank. Again, these two won%26rsquo;t strain your muscles or your mind, but they%26rsquo;re fun reflex tasks that further your comfort level with Kinect.

While the individual minigames offer varying degrees of entertainment, they all nail the controls - or lack thereof - pretty well. There's definitely a bit of a learning curve, and the inherent limitations of the designed-for-the-living-room tech means lag issues occasionally pop up, but overall Adventures succeeds in effectively immersing you in its gamepad-free fun. It also does a decent job of dangling various goals, rewards and unlockables in front of you. Trophies, which mimic your movements and voice, are cool as are the embarrassing post-game photos of you stumbling about like a drunken monkey. Timed, online and split-screen challenges also keep this one fresh beyond that first weekend. As a full-priced standalone, Adventures would be a stretch, but as a day-one pack-in it serves as an entertaining tutorial for your new toy.