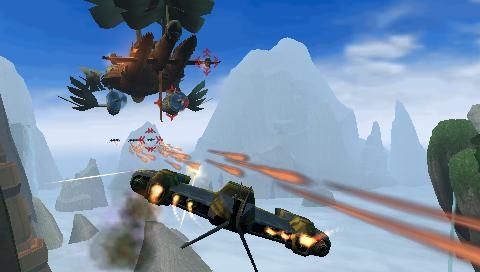 Welcome back Jak and Daxter. After four years of throwing darts at pictures of Ratchet & Clank, PlayStation’s original dynamic duois back. As comebacks go, it’s a return to form: an inventive platformer that charms and challenges in equal measure.

New developers High Impact Games have honoured the series’ legacy by introducing something new. Jak 2 gave us a GTA-style open world city to explore, while The Lost Frontier mixes in Starfox-style aerial combat. The results are polished and impressive. With tight controls, convincing combat, five upgradeable ships and plenty of missions, these sections could arguably stand as a game in their own right. Best of all, you can launch Daxter at enemy craft and steal new weapons and upgrades.

The platforming is just as compelling as ever. Divided between open environments and linear stages, you guide Jak (and occasionally Daxter) from brawl to obstacle course to brain-taxing puzzle. The latter are particularly impressive. By gifting Jak with some intriguing new powers High Impact have crafted some real stumpers that put other platformers to shame. A pity then that they all too often take a back seat to the brawling.

It’s also in these more familiar sections that some old problems rear their blocky last-gen heads. The camera is the biggest woe. A legacy of the game being ported from PSP, the camera can only swivel left and right, and not up and down, even though it's mapped to the right analogue stick. Factor in a fidgety auto-aim feature and a complete inability to strafe and things are looking even less rosy.

Regardless, The Lost Frontier is ample demonstration that Jak and Dax still have the charm to carry an epic platform adventure. If there’s any justice in the world it’ll convince Naughty Dog (the series’ creator) to start work on a PS3 adventure.