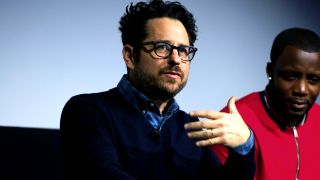 Director and producer J.J. Abrams is currently in town to promote The Cloverfield Paradox, which is now streaming on Netflix following its surprise announcement and release within hours of the Super Bowl. GamesRadar+ was invited to a round table chat with J.J. Abrams, who was recently confirmed as the writer, director and producer of Star Wars 9, to talk about the Cloverfield movie and its stealth arrival, while also touching on Star Wars and the rumoured fourth Cloverfield movie, Overlord.

When did The Cloverfield Paradox actually become a Cloverfield film? It wasn’t originally was it?

Do you get that feeling on other projects? Do you go ‘this could be a Cloverfield film?’

No, in the Cloverfield movies, for me the definition is less that it's part of a linear narrative and more, sort of in a Twilight Zone way. Big 'what if?' contained-movies that feel like more of a DNA thread as opposed to being a literal sequel. In truth, a lot of people said "Oh, this movie didn't need to be a Cloverfield movie." No, it didn't, but the point is less telling the story of that particular creature or characters you knew before, [and] more that if there was a shelf of movies, where you thought this was a sort of really weird, crazy, fun, scary, thrilling, date movie, that's kind of how I imagine what these movies are. And this, early on, felt like it could fit into that category.

Is Overlord the next one? Or is that in that world?

Overlord, first of all it's something I can't wait for you to see, because the director Julius Avery has done an amazing job on it, but the specifics, you know, we should wait and see. But it's a really... that's a crazy movie. (*Current rumours suggest Overlord is set in World War II and features nazis using supernatural forces).

How many people knew about the release on Netflix? How secret was it?

It was really crazy secret. Even within Netflix not everyone knew what was happening, and, at Paramount, even a lot of the departments there didn't know. It was amazing to me that it was pulled off. I feel this way with Apple: they'll announce a product and they'll say "available now" and you're like, wait a minute - they designed this thing, they manufactured it, they shipped it, and no one knew? It literally doesn't make sense how that can happen, and it felt like that with this. It was amazing to me that they were able to keep this stuff secret.

Can you talk about tie-ins to the other films? Do you have favourite Easter eggs that you can talk about that fans can look out for?

The thing that I think is for me, the connective piece, isn't even an Easter egg, more that kind of crazy feeling of "what would happen if?" which was literally the complete inspiration for the first movie - what if there was a Godzilla movie through the point of view of a Handycam? What if [in 10 Cloverfield Lane] someone kidnapped you and was insane but they were also right? You know, things like that. What if people turned on a machine that just broke reality and things became irrational and bonkers? The Easter egg is less a literal thing and more that feeling these movies have a connection.

Are there things in there that don’t mean anything yet but that you’ve thought ‘when this other film comes out, that bit will make sense?’

Are there any Easter eggs that people haven’t spotted?

There are two that I can think of that I don’t think that have been found but that are cool, and, actually, weirdly something that we’re doing with Netflix but we’ll see if that gets found out. [For reference, Stranger Things 2 had a Netflix web browser Easter Egg where you could click on area to unlock an Upside Down area.]

You’ve had great success rebooting things like Star Wars and Star Trek. If a studio gave you carte blanche to restart anything you wanted, does something spring to mind?

I’m saying this being as grateful as I’ve ever been to be involved in Episode 9 and I couldn’t be more excited about what we’re doing. But having worked in this reboot world for a while, with Mission Impossible, Star Trek and Star Wars, I’ve written some things in the last year or so - one of them is a show that we just set up with HBO [Demimonde] and there’s something else - and these were original storylines, things I was really excited about getting to, because I felt like I was looking to not reboot anything. I feel like if I could do anything it probably wouldn’t be (to want) to reboot something.

Are you looking forward to getting back into the Star Wars hotseat?

Yeah. Very much, I’m actually going to leave this room and go there right now (laughs)

Do you think it’ll be vastly different to The Force Awakens and what you did there?