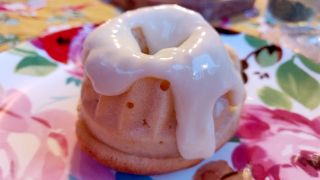 If you’re reading this, you’ve probably gorged yourself on cheese wheels mid-fight in Skyrim to regenerate that precious HP, or heard guards mock you for the thousandth time about someone stealing your Sweet Roll (and hopefully resisted the urge to quicksave your game and punish them for such impertinence). I decided to actually find out what it’s like to eat like a Dragonborn for almost a week after getting my hands on the Official Skyrim Cookbook, with my rule being that I had to eat one meal from the cookbook a day (I couldn’t really whip up a Horker Loaf in my office’s kitchen without having an energetic debate with our floor’s safety officer). Although I couldn’t consume three cheese wheels in one sitting, my gastronomic tour of the Elder Scrolls did open my eyes to one cold, hard fact: adventurers play hard, work hard, and by the Nine do they eat hard too.

So, my menu consisted of:

Light, easy to make, and not too heavy on the stomach.

Cream cheese, double cream, butter, puff pastry; this was a decadent meal but was completely worth it. The Mudcrab Dip was more cheesy than crabby, and for a dish that was somehow meant to feed 10 people, it served three of us quite well.

Dry and bland. Would not recommend.

Although the Redguard Rice was a bit oily, the Potato Bread was soft as a cloud, and pudding was lightly flavoured and way, way more filling than you’d think.

The lamb was marinated in a blend of spices, beef stock, and stout for two hours, and learn from my mistake here: You need to cook down the marinade a lot to get rid of the bitter stout taste... and to prevent yourself from feeling a tiny bit tipsy after finishing the lamb. The Ash Yams are pretty much just sweet potatoes with sharp feta and they tasted exceedingly good.

Hey, I needed to use up the rest of the cabbage, and this was quick! Don’t judge me. Still, good at the end of the week.

By Sunday, all of my food had reached its use-by date and, as I didn’t fancy making Peryite proud by giving myself food poisoning, I bailed on my adventure. It was hard, okay. There were also two special seasoning mixes I had to make: Imperial seasoning (full of pricey spices) and Stormcloak seasoning (a blend of spices meant to warm those who live in Skyrim’s chilly climate). Plus custard from scratch. It turns out custard is really hard to make, and both of my two batches failed terrifically, so some friends had to resort to bringing around shop-bought custard. Shameful, I know.

Eating my way across Tamriel tasted pretty good, with the best meal by far being the Baked White River Salmon (a salmon fillet and creamy vegetables baked in pastry) and the worst being the Festival Meat Pies. Made of a mix of minced meat and rice, they were bland and kind of dry thanks to the hard rye dough I had to make, and they were the ones you might have eaten during the Burning of King Olaf festival in Solitude. Also, no wonder guards are on the case about people stealing your Sweet Rolls, as they tasted damned delicious, more like brioche than a cake with thick cream cheese icing. I ate two straight out of the oven. Sure, I burnt my mouth, but it was worth it.

Although all those in-game sumptuous Boiled Creme Treats and Cooked Rabbit might be ready in a jiffy, and can quite happily be stored in your inventory for 236 hours and counting without going off (although some of the best Skyrim mods do include spoiling food), real life is very, very different. Not only does it take hours to cook some of these dishes, but you’ve also got to eat them (or freeze them) sharpish. Cooking a meal of Redguard Rice, S'jirra’s Famous Potato Bread, and Boiled Creme Treats had me periodically running to the stove for about four straight hours to prove the bread, mash potatoes, brown the minced meat, and leave rice to cook… no adventurer has time for that, believe me. In Skyrim, my house was somewhere to drop off loot that I couldn’t bear to part with and a space where I could whip up a few potions before heading back out again. It was not a place where I slaved over the cooking pot for hours or hunted down ingredients for the perfect Horker Stew.

Just eating cheese wheels in Skyrim – or anything else I could steal from the shelves of the Riverwood Trader, to be perfectly honest – actually is more realistic now that I’ve learnt how long it takes to cook even one of Skyrim’s most basic meals. Sure, that much cheese might not be healthy, but when you’re running around slaying draugr and setting dragons on fire, all those calories get burned up fast. Speaking of calories, there is a lot of them. The dishes in the cookbook are decadent with their double cream, puff pastry, and all that cooking in butter. You’ll need to be as active as the Dragonborn to burn all of that off, as the dishes are definitely made for someone who needs to fuel up before raiding a Nordic tomb.

Perhaps the biggest thing that cooking like a resident of Tamriel (one who lives in the Cloud District by the way, as these ingredients aren’t cheap) has taught me is how grateful I should be for inns, both in-game and in real life. Glorious, warm, food-filled inns. You can chat with an innkeeper and, without enduring much of a wait, ready for you are dozens of different, delicious dishes. And having spent time cooking so many of them myself, I have a newfound respect for the effort it would take to produce each and every one of them. Especially the Boiled Creme Treats. It's no wonder they’re found in only the wealthiest households, as you have to prove the sweetbreads twice and make custard to fill them with. Custard itself is tricky to master and has to cool for an hour before it can be used. No ordinary citizen has time for all that.

If you’re planning on following in my footsteps and eating like a Dragonborn for a week (perhaps in anticipation of more Elder Scrolls 6 news), take my advice: Make sure you’re moving enough to burn off all of those calories.

There’s a reason adventurers/mercenaries/borderline psychopaths in Skyrim have such a range of food to nom on, and that’s because they’re busy riding across the country and waving various sharp implements around to be able to feast so wantonly. But if you’re planning a Skyrim feast, the Official Skyrim Cookbook definitely has enough to keep you full. Try out some of the alcoholic recipes at the end, as there’s mead and even a recipe for homebrew Skooma back there. Not drug-laced, promise.

After more delicious Skyrim goodness? Here’s why Steam reviews are going nuts over this free mod for Skyrim that turns it into a completely new open world RPG, or look below to see what’s going on this week in the world of TV, movies, and games!