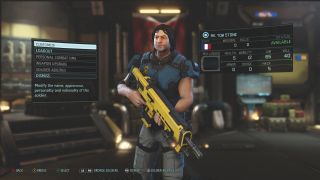 Being surrounded by people you know can be reassuring. Close friends and family know that whatever you do, you’re not really a lazy, disgusting, morally bankrupt person, even if you appear so due to inept social skills or the occasional inappropriate Freudian slip. On the flip side, surrounding yourself with new people can be massively draining. It means putting up a face and holding it in place as you attempt to convince your potential new besties that you’re really a perfectly acceptable human being. I’m terrible at it, and so, after joining OXM, I decided to form all of my friendships with my new team via the medium of XCOM 2. That’s socially acceptable, right?

For those yet to delve into the finest strategy game on Xbox One, it’s about a ragtag group of humans fighting back against a regime of aliens who have taken over Earth. You can customise the characters under command during battles, so you can create family, friends or celebrities and then order them around in an escalating series of shooty fights.

Before I start crafting the OXM Team, I lay down a ground rule for my playthrough. I’m only allowed to deploy for a mission with at least one member of Team OXM in my squad. The moment I run out of OXMers, either via injury or death (when a character dies here they’re gone for good), it’s Game Over, man. This is a social exercise, after all, not just another excuse to spend an afternoon playing XCOM 2.

First up is Tom, who I can get looking surprisingly not unlike Tom. I give him the nickname ‘T-bone’, because I can’t believe no one has called him this before now. He specifically asks to be French for some reason. Kimberley seems a bit peeved by this as I start to create her in the game. “But I want to be French. I have French blood,” she opines. Tom and I exchange glances and it’s clear we’re both wondering whether Kimberley is talking about her genetic background or a nasty jar in her fridge. She continues to hover about until I agree to put her in aviators. This is already proving stressful.

I run into more trouble creating Mark, our art editor. There are only five man faces to pick from and none of them look a jot like Mark. I end up putting an obscuring bandana on his mush and call it a job. In honour of once prevalent Team OXM comrades I create two other members, though they have anagrammed names to protect their post-OXM identities. Lex Alade and Mac Thewattles join the fray. I also put together the mysterious James Nouch, one of our contributors who's joining us as a full-time writer (be gentle). XCOM 2 doesn’t boast a huge selection of woolly jumpers, James’ go-to fashion solution, so I deck him out in a natty headscarf. As for me, I give myself the biggest, gruffest, manliest beard possible. Because if I could I would essentially be a beard on legs in real life. Please feel free to judge.

Anyone who’s played XCOM 2 will know that a strong start is integral to making it to the end of a campaign run. Mess up on an early mission and you’ll feel the effects reverberate through the rest of your game, limiting your options later on as the odds stack up against you. I get off to the worst possible start. In the first mission we’re sent out to a slum district in South Africa. Operation Hot Hymn requires us to extract a VIP safely from the area. In XCOM 2 your squad often begins a mission in stealthy concealment until you engage an enemy force, so that you can set up ambushes. In this mission, though, there’s an automated watchtower keeping tabs on the route to our target. If the team is to successfully sneak through we need to hack the tower and take out its electric eyes. T-bone steps up.

Just so you’re aware of how big the fail that’s about to unfold is, these initial towers are intended as a kind of tutorial. The chance of borking this hack attempt is a widdling four per cent. True to his name, Tom bones it royally, and not only do the enemies nearby clock our location and leap immediately into cover, but reinforcements are called in via air support, and they drop in right on top of us. Within one turn – one single turn – I am lasered into gristle and Mark and Kimberley are gravely wounded. Tom panics, presumably due to guilt, and runs away gibbering. Somehow the three remaining members survive, grabbing the VIP and booking it to the evac point. Tom is the only one unhurt.

Most of the next six missions unfold to the same tune. Tom is a constant in my squad, often the only one of Team OXM able to join with each deployment. No matter how high his chances of hitting an enemy he somehow manages to miss every time. Conversely, despite demonstrating the reflexes of a beached basking shark with a respiratory problem, Tom also manages to avoid getting hit at every juncture. I even stop trying to keep him in cover at one point, running him out into the open as a distraction while the rest of the team goes about each mission’s objectives.

Each time we make it back to the airship base of our obviously doomed XCOM initiative, I can’t help but bring up his infuriating digital resilience with the real life Tom. Kimberley and Mark’s XCOM counterparts haven’t been able to join the fight for about four hours of playtime as they’re both still recovering from the injuries sustained in that first mission. I tell the team this and I can feel a kind of unwarranted aura of blame descend on IRL Tom. What have I done? Have I turned this team against one another in my first week at the helm?

Undeterred I continue, knowing where it’s going. Tom continues to be an utter liability, eventually Mark and Kimberley rejoin the group, and James proves himself to be a reliable shot when it counts. Until, that is, Operation Star God. We’re sent out to Madagascar on another VIP escort mission. We’re doing well, but right at the end, with one turn left until a forced evac, a platoon drops down and immediately enters Overwatch. If any of my squad moves they risk getting shot into fine red mist. Given that they’re all badly wounded I’m looking at a possible total party wipe. The only option is to have one of them toss a grenade to knock the closely grouped aliens out of Overwatch. This would mean someone staying behind while the others make their escape. The only soldier with a grenade in their back burner? It’s Tom, obviously.

Grenades can’t miss here, but that doesn’t stop me doubting that T-bone can pull this off. I line up the lob and push the button. The ’nade dribbles along the ground but does exactly what it needs to, stunning or killing the soldiers behind their cover. Mark, Kimberley, James and Lex all jog to the evacuation spot, leaving Tom behind. The mission ends and the T-bone is captured. He’s a goddamn hero. Back in real life I regale this story to the OXMers. It seems the actions of his digital counterpart have redeemed Tom in the eyes of the team. Thankfully, it seems I’ve not managed to tear them all apart after all. Yet.

I don’t tell them that when I get to the next mission, none of the team are able to contribute. I’m still dead, Tom’s in a lab somewhere being poked and prodded by aliens, and everyone else is too badly wounded. Despite his sacrifice, Tom wasn’t able to fully pull it back together. It’s all over. Maybe I should just stick to bringing cakes in the next time I do a pig-snort laugh, spill coffee so it looks like I’ve wet myself, or unwittingly insult someone’s taste in jumpers. It’s just so much less stressful.