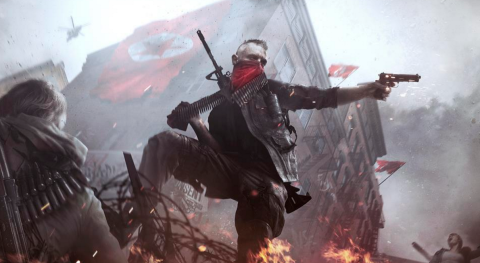 An interesting change of pace for a first person shooter that has some nice ideas and mechanics, but can’t quite get everything to sing.

Most shooters cast you as a one man war striding into battle on a cloud of bullets, carving a path through the enemy like an angry lawnmower with guns. Homefront is a bit more like ringing the soldier’s doorbell and then running away. It’s all set in an America invaded and brought to its knees by North Korea. What resistance remains is on the back foot - undermanned, under gunned and relying on hit and run tactics to chip away at the boot of the enemy forces.

It’s an interesting dynamic, and one that will hand your ass back to you on a plate if you try to COD this - hit a group of enemies head on and you’ll likely end up shot to pieces from all sides as alarms go up and enemies pour in from all sides. It takes a little while to adjust to using the more open maps to stage a quick attack then retreat. When it works it’s a really rewarding sensation - you feel hunted and persecuted, fighting back via tiny little skirmishes instead of full blown assaults. Here you’re swapping out shock and awe in favour of inconvenience and annoyance.

The original Homefront didn’t get the highest of scores but it was enough for THQ to start work on a sequel. However THQ went bust in 2013, selling the rights to Crytek. It took the originally linear game and remade it into an open world shooter. However, Crytek itself ran into money troubles and sold both the game and developer, Crytek UK, to Deep Silver. The studio renamed itself Dambuster and finally got to finish the game.

Initially, it’s all about picking your fights. The bulk of the game takes place in relatively large open maps, usually with one main objective and a selection of bases to clear, as well as other side goals. Ticking off a given map’s strike points lowers enemy presence, increases the local Resistance and slowly makes life easier. The smaller objectives are usually things like finding a way into a building, or clearing out enemy troops. They’re enjoyable if simple, while the ability to go where you want and do what you like keeps things moving along.

It means that I had some amazing moments of guerilla warfare - darting between buildings and launching quick fire-and-forget raids - but there’s also frustration, restarts and bullet walls to scale. The balance of the combat just doesn’t feel quite right. Any kind of attack, or even being seen, can set off alarms and call in tons of reinforcements, so it’s easy to be overwhelmed. In the 360 degree maps it’s harder to maintain a front. You’re dead just about the same time you realise you’re being shot by soldiers you hadn’t noticed. There is a motorbike you can use and while you can get around so much faster, nothing alerts a map full of enemies faster than trail biking over a parked van.

The game divides itself between these open Red Zone battlefields and the (slightly) more civilised Yellow Zones. These are run down urban areas where the oppressed American population live under the angry, stompy boot of the Korean Army. They play out much like the Red Zones - open areas with multiple objectives leading up to a final goal - but add in a barely formed stealth mechanic and a far more stern response if you’re seen.

The stealth, such as it is, simply involves not being seen. The game talks about using people as visual shields but realistically you’re using cars, walls and buildings to avoid being spotted. There are no shadows to skulk in or blending as such. Get spotted and it’s a case of running away, breaking line of sight and waiting out the alarm. It’s likely something you’ll be doing a lot. Because these areas are more built up it’s easier to get caught or cornered when things do go south.

The main objectives in these Yellow Zones is to incite a revolution and trigger a big final battle to liberate the area. That’s achieved via a ‘Hearts and Minds’ meter which needs to hit 100% via a range of different activities. Things like disabling propaganda speakers, sabotaging supplies, retuning radios (for some reason), and so on. It’s not the game’s greatest moment as, combined with the need to try and be stealthy, it’s all just a bit of a chore. Everything you do seems to only advance the ‘Make war go now’ meter by a few percent.

There are a few technical issues: a weird loading pause that freezes the screen every time you finish a significant section or load a new area. Everything locks up, often just long enough to make you think the game’s crashed. The AI also has a serious problem blocking doors. You can recruit resistance members to fight with you (which in itself can be 'fun' as you have to occasionally chase them around like cats to grab them) but they’re a nightmare for getting in the way. At one safe house I had to kill one of my own men simply to get through a door. No amount of leaving and reentering made them shift. Elsewhere, I spent a few minutes wedged in a corridor, sandwiched between my three strong team all endlessly haranguing me for bumping into them.

Evened out across the whole experience, then, Homefront: The Revolution manages to be entertaining without ever completely delivering on its open world warfare potential. There’s definitely an interesting game here if you fancy a different paced shooter. There’s just a few bits that don't quite click. The pace between the Red and Yellow Zones doesn’t flow as smoothly as it could, for example. The scrappy free roam fighting can deliver some great moments, but just as equally frustrate with loops of dying and respawning (the more restrictive set pieces fights can be especially guilty of this) and guns just don't feel... 'right'. Combined it all keeps Homefront at the level of ‘basically okay’.

An interesting change of pace for a first person shooter that has some nice ideas and mechanics, but can’t quite get everything to sing.