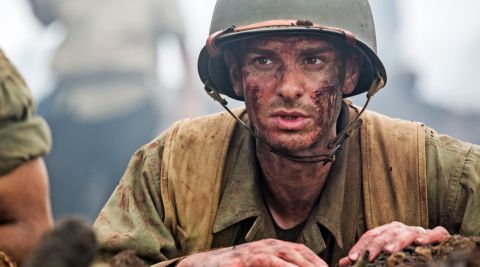 Gibson returns to film’s frontline with a ferociously felt anti-war movie, while Garfield invests his Doss with tremendous conviction.

In May 1945, in the hellfire battle of Okinawa, army medic and Seventh-day Adventist Desmond T. Doss battled to save 75 men’s lives without shooting anyone. In 2016, a troubled star/filmmaker looked to Doss to save his skin too.

Has Mel Gibson earned any reprieve for his grim off-screen rants? That’s not something one film will answer, but in telling Doss’ story, he re-asserts himself as a director to be reckoned with.

Whether you view Hacksaw Ridge as a controversial filmmaker’s apology, a redemption bid, or a startling, peacenik-slanted variant on the war movie, one thing is sure: between its religious themes (nothing ‘subtextual’ about Gibson’s up-front passions) and its trial by fire of a man’s faith, it burns with a bullish conviction that lends punch to its assaults on restraint.

True, clichés mount in the prologue, where the solemn score (by Rupert Gregson-Williams), slow-motion images and deep, meaningful (and vaguely Malick-ian) voiceover set the lay of the land.

When the action flashes back a few years to Virginia, where Andrew Garfield’s Doss hits on Teresa Palmer’s nurse Dorothy with a cheesy line, her wry reply speaks volumes about Gibson’s near-hokey portrait of homeliness: “I never heard that one before. It’s pretty corny.”

But she dates him, anyway – and we’re reeled in too, thanks to the combined pull of our lead and his assured director and writers. Gibson and scribes Andrew Knight/Robert Schenkkan’s grip on familiar material is firm; their images, motifs and structural gambits lend purpose to potentially cheesy material.

Biblical themes resonate as a young Doss wallops his brother with a rock; his bullying dad (Hugo Weaving) whips him with a belt for his crime. Years on, Doss uses his own belt to help an injured man, his journey to redemption symbolically begun.

A godsend as Gibson’s peaceable pilgrim, Garfield imbues Doss’ gangly mannerisms and corn-fed dialogue with a winning mix of Gump-speak sweetness and self-certainty. That certainty is tested in the movie’s second act, a shift from home-baked heaven to the purgatory of military training.

Between Vince Vaughn’s shouty sergeant and the barracks bullies, we’ve been here before. But Vaughn is more engagingly inquisitive than other, more abusive genre types; and Doss’ comrades aren’t all brutes.

Most are just terrified of war and worried about fighting alongside Doss, who refuses to carry weapons but yearns to go to war and save lives. As Doss is court-martialled for his conscientious objections, the judgement sets up act three’s inferno: “You are free to run into the hellfire of battle without a single weapon to defend yourself,” he’s told/warned.

At which point, steel yourselves. After a barrage of bombing, Gibson leads us up a cliff and into a Bosch-ian nightmare. Between the mud, splayed bodies, bullet-pierced tin hats and torsos used as shields, the Battle of Okinawa pulverises. War has been hell in movies before; this is worse.

When we don’t recognise the dead’s faces, it’s because rats are devouring them. But what impresses otherwise is how Gibson pushes his direction beyond the exploitative possibilities of raising hell. True, we don’t learn much about the enemy: problematically, they are, merely, “the Japanese”.

But the slow-burn promise of the film’s opening acts pays off in a fierce focus on characters we’ve come to know, played with panic-faced conviction by Sam Worthington, Luke Bracey and others. And it pays off in Doss’ actions.

Only ever using a rifle to mock up a stretcher, Doss resembles a man trying to stem Niagara Falls with a teacup on his returns to the field to save lives. “Please, Lord, help me get one more,” he begs. And he keeps trying, dodging death to drag the wounded from battle, dress injuries and winch them down a 400ft cliff with a makeshift pulley, staggering like a man drunk on righteous determination.

True, Gibson can’t be accused of subtlety. “What you did on that ridge is nothing short of a miracle,” Doss is told, lest we missed the religiously freighted images of watery dousings and holy ascensions. But the tensions between faith and fighting are properly seeded, then rammed home with an intense immediacy in the heat of battle.

Whether or not that’s enough to salve Gibson’s shaky reputation, Hacksaw’s heart-in-mouth climax asserts this much: he’s earned our belief in Desmond Doss’ astonishing story.

Gibson returns to film’s frontline with a ferociously felt anti-war movie, while Garfield invests his Doss with tremendous conviction.