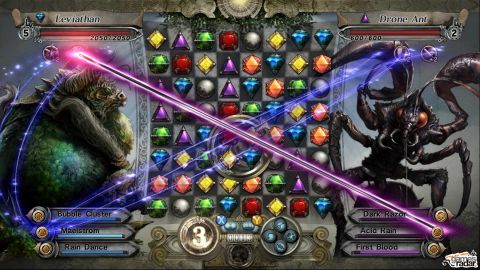 The Bejeweled-meets-D&D smash Puzzle Quest proved serious RPGs and sparkly gem matching puzzle gameplay could tie the knot and keep from strangling one another. Gyromancer treads similar territory but adds in a few new twists… literally.

When the leader of a rogue group of revolutionaries launches a surprise attack on a member of the royal family and slays a prominent count and countess, the kingdom’s nobility cries out for vengeance. As a powerful mage capable of summoning all manner of deadly creatures to your side, you’ve been called in to track the bastard down and drag him kicking and screaming to face justice at the end of a sharp blade. Chasing your quarry into the dark Ademonda Wood – a dark realm filled with magical denizens with a hunger for wandering adventurers – there’s no choice but to roll up your sleeves and start cracking evil skulls.

Exploring deep into the sinister forest inevitably puts you in the path of some nasty adversaries. Diving into battle, the gameplay will look extremely familiar to anyone who played Puzzle Quest, except that you’ll charge up attacks and deal damage ina fantasy-themed version of Bejeweled Twist. Rotating circular groups of four gemstones to create chains of three or more like-colored baubles clears them and charges up your monster’s powers. When these abilities peak, they form a charged gemstone that, when cleared, unleashes magical attacks that deal damage to your opponent. All creatures have elemental affinities that correspond to certain gem colors, and every inadvertent match you make that matches an enemy’s affinity will gradually fill their ability meter and push them a step closer to launching their own attacks against you.

There are subtle nuances that work toward freshening up the experience. Items can be used to influence the playing field, gold you collect can be spent to unlock new beasts you uncover, and experience gained in battle boosts your wizardry powers and your creature’s abilities, among other things. You can only equip and carry three magical beasts with you at a time, which plays into the strategy as well. The game has a kind of subtle Pokemon-like vibe, but instead of summoning cutesy, doe-eyed wildlife, your battling companions are various massive flesh-eating, fire-breathing, fanged behemoths.

Gyromancer has a decent story and simply gorgeous artwork, though the presentation is serious lacking in the drab dungeon crawling areas. However, the excellent puzzle battles are where you’ll spend most of your time. These frequent encounters are gripping and quickly become seriously challenging. Despite the re-hashed ideas, there are more than enough unique tweaks to the formula to warrant giving Gyromancer a spin.