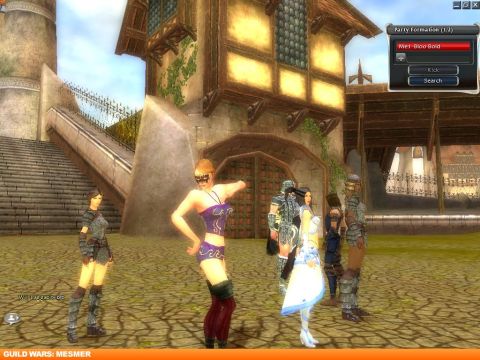 By cutting out all the fat, Guild Wars distills the best elements from the massively-multiplayer online role-playing game genre and presents you with a flexible character creation system, an epic set of story missions and robust PvP modes minus the monthly fee. If you’ve been curious about MMORPGs like World of Warcraft but balk at the monthly fees and time sinks associated with them, then Guild Wars offers a fun and fast paced alternative with lots to offer for both hardcore gamers and casual questers alike.

If you choose to create a PvP character, you start off at the maximum level of 20 with some decent equipment. If you go this route, you’ll only be able to battle in PvP arenas and won’t have a lot of the great skills and equipment upgrades that are unlocked by adventuring through the story missions with a Role-Playing (RP) character that starts off at the conventional level 1. But that doesn’t matter, because Guild Wars is so well paced that leveling up a RP character to 20 never feels like a grind and can be accomplished with about a week or two of moderate playing. On top of that, all your characters are linked and will have the same guild, friends list, and will have access to the same skills unlocked.

With an incredibly fluid and flexible character creation system, Guild Wars never lets you feel that you’ve been trapped in a certain character build. There are six professions: the Warrior, Monk, Necromancer, Mesmer, Ranger, and Elementalist. You’ll need to choose a main and secondary profession for any character, however out of the hundreds of unlock able skills available, you can only take eight with you when leaving a main city or entering a PvP arena. The skills you prefer for adventuring are often quite different from the ones you prefer for PvP combat and by allowing you to switch your skills and re-adjust your attribute points that affect them, Guild Wars provides lots of incentive to experiment with various character builds until you find the one that fits your play style best.

Stock characters like the hard hitting melee warrior or the caster that can do nothing but heal are incredibly rare with this dynamic character creation system. Do you want a Warrior/Monk who can hit hard but keep the party healed and buffed up with enchantments? Or do you like the idea of a Necromancer/Elementalist who can summon undead minions to keep enemies at bay while raining damaging spells from a distance? The choice is yours and Guild Wars provides you with a lot to choose from.