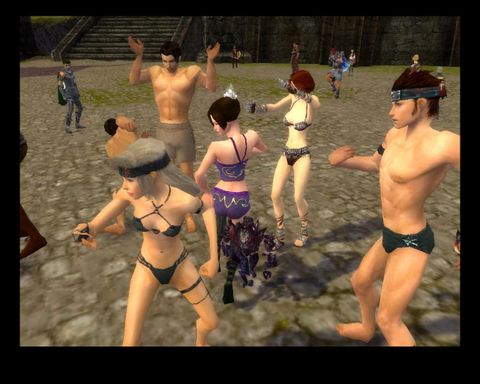 Like its predecessors, Guild Wars Nightfall breaks the standard business model set by Sony and Blizzard by offering a streamlined, massively multiplayer online role-playing experience with a robust PvP system and lots of new missions for adventurers - minus the monthly fees.

Set in the Egyptian-inspired land of Elona, Nightfall adds two new professions to the original six from Guild Wars: Prophecies (the original Guild Wars, which was retroactively renamed when the first expansion came out). The Dervishes are scythe-wielding masters of melee combat, armed also with various area-of-effect attacks and enchantments. Paragons are ranged spear-throwing fighters, capable of boosting your party’s abilities with inspirational shouts. Series gurus should be pleased with these new additions, which complement the original professions better than the somewhat disappointing Assassins and Ritualists from the last expansion pack, Guild Wars: Factions.