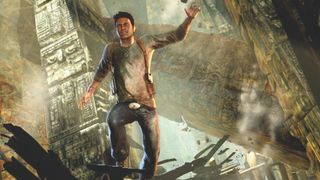 “It’s a little-known fact that Nolan’s been in every video game released since Uncharted: Drake’s Fortune.” Richard Lemarchand, former lead game designer at Naughty Dog, is teasing the smooth, smart-mouthed star of the Uncharted series, Nolan North, for also being the star of many others. North is joining in: “I’m Lara Croft. I’m Mario. I’m characters who don’t even speak.”

The pair have an unexpected chemistry, Lemarchand’s effusive British wit complementing North’s dry one-liners. Above all, as they speak to us about the origins and crafting of the Uncharted series, they’re enjoying themselves – and reflect frequently on the importance of having fun while creating entertainment. Before all that, though, we start with a question. “Where did the name come from?”

Lemarchand repeats after us, trying to remember the first time he heard the monicker that’s become so central to his career. “It was probably Amy Hennig,” he continues, crediting the series’ original story guru and creative director (now running her own independent game dev consultancy company). “Yeah,” agrees North. “Amy had the idea that it was a descendant of Sir Francis Drake.”

This was back in 2005, after Lemarchand had spent a decade at Crystal Dynamics with Hennig, making games such as Gex and the ambitious Soul Reaver, and just as Sony was gearing up to unleash its hugely anticipated follow-up to PlayStation 2. “I was working on Jak X: Combat Racing at the time, which was kind of a transition project for us,” Lemarchand says.

“A few of Naughty Dog were working on the very early stages of development on the game that became Uncharted: Drake’s Fortune. We knew it as ‘Project Big’.” At the very beginning, Drake didn’t even have a first name. “I remember the email thread, where people were suggesting different ideas – like John, for a kind of generic feel,” says Lemarchand. “But Nathan eventually felt like the right kind of name for the guy.”

New generation What was always certain was the platform that the game was intended for. “It was always going to be for Sony’s next-generation games machine, which we knew was called PlayStation 3,” Lemarchand continues. “But we didn’t know the full story of the hardware. We knew ballpark figures of what it would be able to do, and we started planning for this huge jump forwards in terms of graphical fidelity. We also started planning, of course, for how we were going to evolve the kind of gameplay that Naughty Dog has always been interested in – character-action games that, as closely as they can, integrate terrific cinematic action with really great, classic gameplay.”

At this stage, most of Naughty Dog was still concentrating on Jak X, making sure that the studio delivered “something really great”, Lemarchand says, for what it knew would be its last PS2 title. When he stepped over to Project Big, the team was still tiny. “If you count [Studio President] Evan Wells and Amy Hennig, I think there would have been six of us altogether. They had laid a really solid foundation, the idea of this contemporary reimagining of the great pulp action-adventure tropes. We really hit the ground running.”

What’s in a name? Nathan Drake boasts the same initials as creators Naughty Dog. From an early stage the plan was to reinvent the matinee adventure genre. While the early development went smoothly, there were new challenges for the team. The cartoon-style visuals of Naughty Dog’s previous games – most notably Crash Bandicoot and Jak And Daxter – had all been hand-animated. But Uncharted’s sophisticated mix of story and gameplay required something else, and for the first time the studio was getting involved with motion capture and live actors. Fortunately, one of those actors had a little experience.

Subscribe via Print or Digital for as little as £16 / $9 for a quarterly digital subscription and get the must-have companion for PlayStation fans.

“I’d done NBA ‘06: Featuring The Life for Sony,” says North, before a quizzical look leads him to add, “Yeah – I wasn’t the one actually dunking the ball.” Instead, North was the “Jerry Maguire-type agent” leading the player-character through a career from rookie to all-star. “This one was ahead of its time,” he says, speaking highly of NBA Director Brandon Akiaten, now a Creative Director at Sony Interactive Entertainment.  “He was a film student, a really great guy with a great mind for games. But Uncharted went to a whole different realm.”

To secure passage to that realm, North first had to audition. Even this initial part of the process signalled that Uncharted would be different. “For most videogames you go in, and you lay down a voice and they’ll show you some pictures. I walked in and there were a bunch of people in this small space, no bigger than this room,” he says, waving his arms around the cosy games setup we’re sat in at Sony’s UK HQ in London. The crowd included Hennig, Gordon Hunt – a veteran TV and film director who’d also worked on Soul Reaver – and some executives from Sony.

“I remember looking around going, ‘Well, where’s the script?’ and they were going, ‘No, we just want you to kinda...’ I didn’t know I was supposed to be off-the-page, so I had no idea what I was doing.” Even so, the actor made it through to the next stage. “Fortunately, whatever I did at the first audition got me to the second one,” he says.

“I remember just being in a great mood – I understood what it was. They were inviting me to play, which was the most interesting thing. And I did – at one point I ran across the room and slid. I remember it was a hardwood floor, a dance studio-type thing, at the Sony offices in Santa Monica. I had a pretend gun – it was like being a kid again.”

Although Lemarchand wasn’t part of the Uncharted team at this point (“I was probably still tuning race cars for Jak X”) he does remember seeing Nolan for the first time, on a tape of these auditions. “I had faith in the guys, always, that they’d find really terrific people,” he says of his initial reaction to the casting. “And it was just one of many points where you could really see the project gelling, all the way down the line.”

While Nolan was a veteran of video games and, in the eyes of Hennig, a natural fit for Nathan Drake, the casting of love interest Elena was rather more unexpected. “The most interesting part of it was that Emily Rose was the reader,” remembers North. “She wasn’t even in consideration at the time – she was just reading with anyone who came in.” Rose played through the script with North and the pair worked so well together that she was hired ahead of everyone officially auditioning.

“Her career’s really taken off,” says Lemarchand, referring to Rose’s lead role in US television drama Haven. “And I think the chemistry that emerged – probably in that audition – between the two of you was a big part of the success of Uncharted: Drake’s Fortune.”

After the casting was complete, the production itself could start. North and his fellow stars soon realised that Uncharted’s approach to motion capture and performance was far more complex and integrated than usual for games. “A lot of developers – perhaps from budgetary concerns – will get actors in just for an afternoon,” says Lemarchand. “But we didn’t think that was the right way to do it. We believed the best way to do it was to get the actors involved right from the very beginning.”

“We rehearsed,” puts in North, stressing his words to demonstrate that such luxuries are unheard of outside of Uncharted. “We get a full day of talking it through, blocking it out – much like you would a television show, or a film.”

“What’s important is that it gave the actors the opportunity to contribute their ideas,” Lemarchand says. “Quite often somebody will come up with a line on the spur of the moment that we’ll then incorporate into the game, and actually change the lines on the printed page.”

Production takes place in a blank, empty studio stripped of everything bar cameras, actors and crude props. These days Naughty Dog occupies a hangar-like space on the Sony Pictures lot, but early on they were in LA’s House Of Moves, a motion-capture facility also used by survival horror Dead Space. North consistently likens the process itself to theatre, which is similar in its makeshift sets and in the amount of work – and freedom – it presents to the actors. Although theatre actors don’t have to wear the suits.

“Ten pounds of crap in a five-pound bag,” remarks North dryly, of his first time in the skintight motion-capture one-piece. “Sometimes we have to go back to loop ourselves – it’s called ADR,” he continues, referring to additional dialogue recording done after the initial video session. “There was one time – I had it burned [in my mind] – it was a brown motion capture suit. And I could barely look at it. I needed to cut down on the cheeseburgers, and go for about a 40-mile jog.”

With the production up and running, and the studio busy designing the framework of the game, the missing link was how the two would come together. A new expertise developed within Naughty Dog, focused on integrating performance data into the Uncharted engine. North sees the area as “very crucial to this game”, while Lemarchand explains how the hand-animation skills from Naughty Dog’s earlier titles came into play, with animators working closely to live video shot on the mo-cap stage.

“They can see exactly what the actors are doing, down to very tiny details in their faces, and then reproduce that with hand-animation for the finished game,” he says. Their work is so good, according to North, that not only is it responsible in large part for Drake’s popularity, but is also capable of confounding family members. My wife has watched the game, and she says, ‘You do that.’ By the time we’d got to Uncharted 3, I’d seen animations that even to me are a little uncanny.”

This particular area of development – the fusion point where performance meets programming – is one to which North was particularly drawn when researching his behind-the-scenes book, Drake’s Journal. For North, it revealed essential similarities between the various crafts that underpin Uncharted’s astonishing quality.

“The one thing I’ve learned is that the collaboration on that mo-cap stage is mirrored at Naughty Dog, with the designers and programmers and artists. You go to the office and you see them jumping over the cubicles and running around,” he says. “There’s this idea that game developers talk about, which is that in order to make fun, you have to have fun,” adds Lemarchand. “I think that’s what everyone likes about working with you, Nolan – that you’re genuinely into the subject.”

“Well, that’s what they say about Richard,” replies North. “He’s genuinely into the subject matter, and he rarely wears any pants.”

This article originally appeared in Official PlayStation Magazine. For more great coverage, subscribe so you never miss an issue.