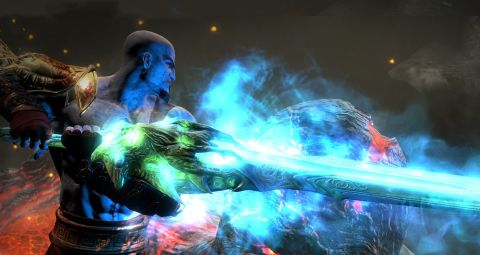 The conclusion of the God of War trilogy is an escalating series of endings itself, one gushing finality on top of another until the angriest man ever has stabbed, screamed, torn and wrenched apart every last thing in a Greek pantheon of grim-faced gods. If Metal Gear Rising hadn’t already taken it, ‘Revengeance’ would make a more fitting subtitle here than boring ol’ ‘Remastered’, but it is what it is: a beefed-up version of game all about having ancient, mythological beef.

If you’re just joining us, God of War 3 starts with the repeatedly wronged Kratos on the cusp of crushing Zeus, the manipulative god presiding over Mount Olympus and a whole interactive diorama built out of bloody Greek mythology. Kratos has enlisted a race of behemoths to help him ascend Zeus’ stronghold, rend it piece by piece and finally exact revenge for, well ... the list is getting long at this point. Kratos yells “Zeeeeuuusss!” so loudly it clips the game audio, which seems like enough background to get a fist-pumping action game going.

God of War 3 starts with one of the most well-assembled spectacles in modern games, and though its impact dissipates over the course of your rampage it remains the crystallized form of God of War’s aspirations as a series. As the battle goes on, the camera flows over and under its subjects to keep up with incoming challenges to the player: there’s climbing underneath the palm of a giant hand, chain-swinging between massive shoulders, frantic fighting on a gnarled wrist and a multi-stage showdown against Poseidon, the massive oceanic god that just manages to fit into an already crowded frame. This is God of War at its heftiest, performing a kind of gameplay cinematography that puts absurd violence, story progression and glimpses of a meticulously realized world into one coherent motion.

The PlayStation 4 upgrade really makes it a marvel all over again, even if the clean-up work is just visual. Think of the work in Remastered as a to-do checklist, every bit as fatal to a formerly compromised presentation as Kratos’ vengeance is to the average god. Bumped to a razor-sharp resolution of 1080p and an unwavering 60 frames per second, the environments, muscular characters and screen-shaking animations come to an unreal life. If you squint, God of War 3 Remastered almost has the hand-made physicality and screen presence of Ray Harryhausen’s stop-motion effects, minus the telltale jitter. Maybe it’s more akin to Ray Harryhausen having a vivid nightmare.

You also get the obligatory photo mode, which is so obligatory it can do nothing but pan, zoom and throw in some filters. Even with improved image quality, God of War 3: Remastered looks sterile and two-dimensional when not in motion, and the photo mode can’t do much good with the game’s designer-controlled camera angles. You’re better off using the PS4’s trusty ‘Share’ button, unless you really want a sepia Medusa for your increasingly weird Instagram feed.

Aside from good-if-not-startling graphical refinements, the five years since its initial release have given God of War 3 a cyclical refresh of sorts. Unlike the open-world bloat out there now, this game is entirely linear, designer-directed from moment to moment, and it stops the upgrade system at weapons and magic. You move from arena to arena, slaughtering minotaurs and other snarling minions in cutting pirouettes, stopping only to shove the occasional puzzle block into the right spot. It has a classic construction to it, keeping a tight grip on pacing as Kratos barrels through precisely made gauntlets and the greek icons itching to be demolished at the end. The pattern repeats perceptibly in God of War 3, becoming even more obvious as Kratos loses sight of his initial motivation and just sort of meanders to getting 100% murder completion.

Remasters are meant to repackage and preserve older games faithfully, but God of War 3 makes an argument for editing, or offering alternative cuts from the main menu. Editing could help a game like God of War, which is strung across high points but becomes slack and tired in the bits between. In a game hinged on triumphant and bloody huzzahs, everything else is susceptible to the forgettable haze of busywork. Can you even remember what happens between the deaths of Hades and Hercules?

God of War 3’s combat-heavy slog through a series of deadly crates (sorry, ‘labyrinths’) about two thirds of the way though is also emblematic of this reliance on filler - every fight goes on twice as long as it should, artificially creating space between you and your next objective. The rage engine loses steam at a crucial point in the trilogy.

And it doesn’t happen because of careless design - it’s really a product of the game’s shape being in service of its lead character (which you usually want). Kratos, for example, is preoccupied with guttural roaring and unhinged savagery directed in 360 degrees. It makes sense, then, for the combat to be meaty and beautifully animated, but also sloppy and indiscriminate, destined to end in repetitive executions. What interesting mechanical puzzles and incidental characters there are don’t really have time to be thoughtful, because revenge revenge revenge. And his interaction with the ladies, is, well, let’s just say the portrayal of women in God of War 3 has aged about a hundred times faster than the rest of the game - it now comes in at a full 1080p if the ‘p’ is for “please don’t let anybody walk in during this cutscene.”

Kratos ruining his own game is a poetic outcome in a sense, given that God of War 3 often tries to connect his wholesale slaughter of larger-than-life gods to the literal end of the world. The world beneath Olympus, a wonderfully crafted land of snarling dangers and obscenely large statues, suffers because no-one is in control of the sun, the ocean or the weather by the time Kratos is done. It would be a resonant and tragic arc if God of War 3 had the conviction to carry it through properly - to force Kratos into learning, changing or even regretting anything. Instead, because the game is so dominated by triumphant thrills, regardless of their cost, it just shrugs and says “well, the gods were evil anyway, so you were really HELPING.” Kratos never learns anything, which is a big miss for a game promising the mother of all endings.

That parade of cathartic moments still makes God of War 3 worth playing, especially given the vividness and eye-popping destruction woven into every major battle. It peaks and drags and peaks and drags, sure, but God of War at its high point was never going to be sustainable. Five years on, it’s clear that God of War 3 is especially emblematic of a series trying to figure out how to go higher when you’ve already reached the top of Mount Olympus.