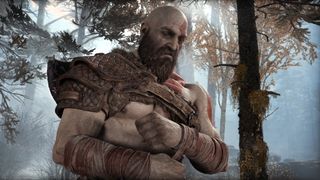 God of War creative director Cory Barlog has suggested a future game in the PlayStation series could explore Kratos' meeting with his wife, Faye, whose funeral set in motion the chain of events that make up the driving narrative of Sony Santa Monica's 2018 PS4 exclusive.

Speaking in a new interview to PlayStation Access, Barlog's comments on his desire to explore more of Faye's backstory can be heard around the 37 mark in the video below which, be warned, contains full spoilers for the God of War ending.

“Faye was the one I identified with the most." explains Barlog."You get to understand that she has way more power than all of them and is actually the controller of so much in this universe. That way when we build this up to when you actually get to see this, and I hope… I don’t know how we’re going tell this or when we’re going to tell this, but I really want to tell the story of Kratos and Faye meeting.”

Of course, the now celebrated game developer has also expressed interest in heading to Ancient Egypt for a potential God of War sequel, while recent job listings from Sony Santa Monica suggest Kratos could be traveling to Japan for his next adventure, which has all but been confirmed by a number of previous teasers.

With the PS5 scheduled to release later this year, anything could be on the cards for everyone's favourite half-deity, and here's hoping Barlog gets his wish to make a meet-cute with one of the most emotionally stunted Gods in Greek mythology.

As a new year and new decade begins with 2020, look back with us at the 100 best games of the decade just gone.