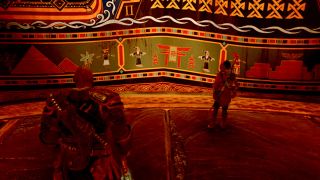 The two job listings are for an Assistant Cinematic Director and Cinematic Artist respectively, both of which would be involved with Santa Monica's motion capture shooting, and specifically state that the ideal candidate would have "experience in martial-arts [sic] or dance."

Now, there's a number of ways in which you could interpret these new postings. Martial arts, of course, instantly conjures up the renowned fighting styles of Eastern Asia, such as Karate or Taekwondo. As it so happens, God of War takes place in a world of many realms based on the different cultural mythologies of the world, and the God of War ending explicitly acknowledges Japan's own rich folkore with the appearance of a symbol associated with Shinto war deity, Hachiman (see below in the bottom left-hand corner of the wall).

Of course, that symbol was also displayed alongside an Ancient Egyptian hieroglyph and Celtic Triskelion, but Santa Monica's interest in bringing martial arts aficionados does add validity to the idea that East Asia is next on Kratos and Atreus' grand tour of religious world history.

That said, while none would describe Kratos' fighting style as anything close to the grace and tact associated with martial arts, this desired skillset listed in the vacancies could simply be highlighted as relevant experience to lean on for staging fight sequences in real time on the mo-cap stage. In short, we shouldn't read the listings as a guarantee that Kratos will be taking on Asia's pantheon of deities for his next adventure.

God of War creative director Cory Barlog himself has expressed interest in heading to Ancient Egypt for a future installment in the action RPG series, while a previous teaser (hidden in a PS4 theme) suggests the Norse apocalypse of Ragnarok is still on the cards for our Greek demigod. Former Santa Monica Studio job listings have also implied that a God of War sequel is in the works, and that it'll be coming to PS5. Fingers crossed that we'll learn something more official soon.