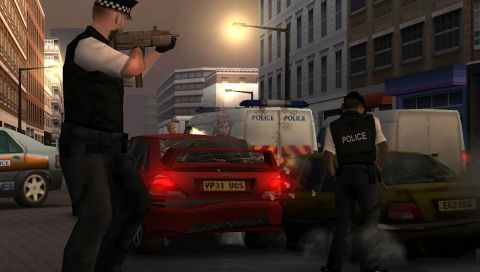 Gangs of London is a great portable gangster game.The real success is the focus on fast, fun sequences that put you in the middle of the British underworld Guy Ritchie is so good at depicting. Rather than long expensive cut scenes, comic book-style panels convey the story before and after missions.Missions flash by as you murder, maim and kidnap on foot and on the road to seize control of London's crime subculture. Fail to kill a rival gang boss or kidnap a new round of prostitutes from another rival gang and you're back at the start of the task, but even the longest missions are a quick, commute-friendly ten minutes.

Playing as one of five gangs - not as any one particular member, but as a driver or ordering about an entire group of ruffians on foot - you gradually consume the other gang's territories and make London wholly yours, mission by bloody curse-filled mission.One gang might have to protect a visiting Mafia Don, but play through again as the rival gang and you're required to off him.

Each defeated gang opens up new options for the wonderful number of minigames, including a recreation of London's infamous cabby test, putting down a zombie attack and fleeing increasing police pursuit.You can play darts, or hit the retro arcade.These options really open up your choices when you choose to bring Gangs with you.