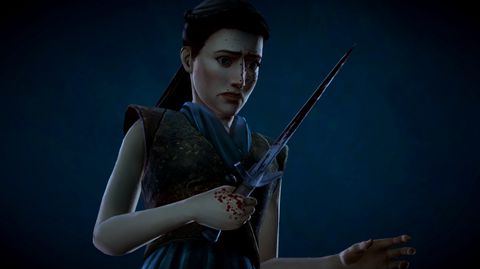 Though hard to grasp for the uninitiated, Telltale's Game of Thrones is a meaty addition to the established tale, creating a gut-twisting drama that'll leave you feeling awful, just like Game of Thrones should.

When you play the game of thrones, you win or you die. Sounds simple enough, and if you're a fan of the show, you've probably rolled your eyes at characters who lost all manner of honor and body parts when they were too dumb to figure it out. But it gets a lot harder when it's you in the hot seat (the hot throne?), and Telltale's Game of Thrones makes sure you feel the burn. A nerve-rending whirlwind of drama and uncertainty, it not only captures the spirit of Game of Thrones, but builds upon it in a way that feels truly unique for the series by putting the lives of its characters in your hands. Impenetrable as it can be to those who aren't already devoted to the lore of George R. R. Martin’s universe, it's everything a Game of Thrones fan could ask for and deserves a seat of honor right alongside the show that spawned it.

Rather than trying to retread events from the Song of Ice and Fire book series that the show has already covered, Telltale's Game of Thrones focuses on a totally original (but Martin-approved) cast of characters over the course of its 20-hour run. Here we learn the story of House Forrester, a clan of bannermen loyal to House Stark, imperiled when their benefactors are betrayed and the Forrester patriarch dies in the chaos.

You play as several different members of the Forrester family, scattered from King's Landing to the intimidating Wall, and have to do your best to keep them alive and working to save the House. As with all Game of Thrones works, you can expect a tale rife with tangled political intrigue and brutal violence, though the Forresters' story also has an impressively human side - characters who seem one-note in the story's opening hours develop into genuinely likeable, engaging people by the end, with moments of true tenderness sprinkled in to contrast (and intensify) the doom and gloom. By the end, you actually want to keep them safe for reasons outside 'winning' because they're fascinating people, not just the least awful ones around.

Paint me a picture

Given that the Game of Thrones TV show is entirely live-action, the leap to Telltale's oil-painting aesthetic may be a bit jarring, and movements in the engine can look comparatively jerky. But the art style is really lovely once you get used to it, despite some stilted animations here and there.

If any of that background sounds confusing though, this probably isn't going to be the game for you. This Game of Thrones tale borrows heavily from the source material and doesn't devote much time to explaining it, so you'll often be left confused as to what's happening around you or why it's important. Indeed, the game opens on a catalytic event from the TV show, and if you aren't already up to speed on why it's important, you'll quickly feel lost. You can still technically play the game even if you know nothing about the series (and if you didn't just add 'Jon Snow' to that sentence, you're in that camp), since the focus is on the Forresters, but there will always be a sense that you're supposed to be more affected by some of the side characters that show up and make trouble for our heroes.

However, those already caught up on the show (or at least familiar with everything up through season four) will feel that special Westeros magic in every corner of this game, from environmental and characters designs down to far-reaching conspiracies and a deep, constant sense of unease. It flawlessly maintains a critical feeling of suspense, so even in its least action-packed moments (like a dinner with the Forresters' snotty neighbors, which would run-of-the-mill in any other story), danger is just one wrong word away. Combine that with a masterfully-paced second half that makes the climactic tension difficult to bear, and Game of Thrones creates a nearly pitch-perfect drama that knows exactly how to break you down and leave you clamoring to find out what comes next.

Telltale's Game of Thrones may focus on an original cast of characters, but you can expect established characters to make plenty of appearances along the way, tailor-made for maximum fan joy. Whether or not that ends up being good for the Forresters is all a matter of perspective, and knowing when to say the right things.

The queen of Westeros and master of underhanded ploys, Cersei is suspicious of everything you do and will make sure to test your allegiances. Don't worry, it happens to everyone.

Cersei's sarcastic and whip-smart brother, he makes a hobby out of foiling her plans. He might lend you a hand with your problems, if you're willing to take it.

The betrothed of King Joffrey Baratheon, she's an up-and-comer in the royal court. Mira Forrester is her handmaiden, so if you play things right, Margaery can be a valuable asset.

The bastard son of Roose Bolton, the Warden of the North, Ramsey delights in pursuing his father's political interests in the most sadistic way possible. You better hope he doesn't come calling, or no amount of pleading will save you.

The mild-mannered bastard son of Ned Stark, Jon Snow appears in episode two and tries to set squire Garred Tuttle on the right path. I don't know if I'd take advice from this guy though - he doesn't know much of anything.

Mother of dragons and speaker of amazing lines, Daenerys appears in episode two in all her queenly glory, on the eve of campaign to free a city's worth of slaves. She might be willing to help our heroes, if they can handle the heat.

That feeling comes straight out of the show and is loyally replicated here, but this story takes things a step further by putting you in charge of major decisions that you would've just watched with an intense mix of dread and schadenfreude before. While the actual gameplay is fairly basic and familiar - most of the actual interactivity comes in as dialogue choices, with fairly standard QTEs filling out the rest - the sort of choices you're forced to make will keep you twitching with anxiety in a way even The Walking Dead can't match.

Many of your decisions have long-lasting consequences that are difficult to see ahead of time, so the choice you thought was stupid in episode one could have saved your neck in episode three, if only you'd known in time. If the whole scenario made you dread even innocuous dialogue choices before, having to make literal life and death decisions while the timer's running down can easily leave you paralyzed with indecision. And they really are life-or-death - unlike in some previous Telltale games where the protagonists' fates are set in stone regardless of your input, main characters here can either make it out alive or lose their heads if you slip up. Basically, it's the most effective use of Telltale's decision-based model to date, equal parts uncomfortable, worrying, and exhilarating. 'You know nothing' never hit so close to home.

Telltale's Game of Thrones certainly isn't a game for everyone. Beyond the imposing amount of prior knowledge you have to have to understand it, its relentlessly dark and brutal storyline can be hard to handle. Some players will want to pass on a title that bleak, but as George R.R. Martin has proven, some just can't get enough pain; for them, this Game of Thrones game is incredibly satisfying. From engaging characters to lovely environments, from political tiptoeing to so, so much blood, Telltale's Game of Thrones is a masterfully-crafted and worthy addition to the Game of Thrones universe. Suffice to say, it brings honor to the family name.

Though hard to grasp for the uninitiated, Telltale's Game of Thrones is a meaty addition to the established tale, creating a gut-twisting drama that'll leave you feeling awful, just like Game of Thrones should.