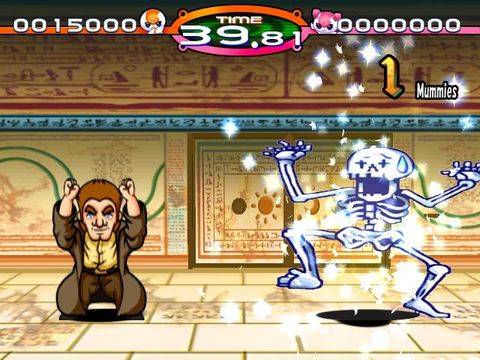 We've lived with the Wii for more than a year now, so there's really no reason to belabor this opening point: Yes, the Wii plays host to an inordinate amount of minigame collections. Furthermore, most of them are insipid, although some few are actually worth your time, whether you're flying solo or waggling with companions. Furu Furu Park unfortunately does not fall into that worthwhile category, but it's hard to tell if it just misses the mark or if it truly falls into the category of soulless casual cash-ins. We're not even sure that the developers knew what they were aiming for.

Thirty minigames populate the lineup in Furu Furu Park, most utilizing the motion controls of the Wii Remote to perform simple actions. While the majority are original bits concocted specifically for this release, a handful of the minigames are patterned as bite-sized versions of Taito classics, including Pocky & Rocky and Arkanoid. But we're using only a miniscule amount of hyperbole when we say there's nothing to these games. Case in point: Arkanoid and Bubble Bobble each feature only a single stage.

Even the new segments, such as Skateboarding, Rev the Engine and Super Karate, may last 30 seconds or less and require minimal player interaction, such as holding the Wii Remote in one of three predetermined positions. We're not decrying simplicity as a general design element, but too many of the included games feel tossed together, while the few notable ones offer only seconds of unique play.