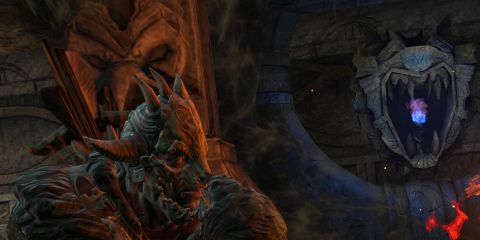 Dark Vale Games’ Forge is a chaotic experience. Everything is always moving, arrows and spells and axes are always flying around. You’re rarely ever not engaged in combat. If you can learn to love this fervor, it’s a game that’ll keep you smiling and staring at the screen for some time. But the problem is that Forge too often gets out of hand, leaving you playing a jumbled spamfest--not a game that births madness from strategy or skill.

Essentially, Forge is a third-person shooter with RPG elements grafted on top. It’s set in a gritty fantasy world that’s detailed and vibrant, but features a by-the-book style that keeps the game from standing out visually. Everything you do, save the tutorials, is online and against other people, from standard team deathmatches to an objective-based game akin to capture the flag. It gets straight to the point, offering fast, painless matchmaking and the entirety of its classes and abilities right from the start.

New players will quickly realize that kills don’t come easy.The twitch-based, seconds-long encounters of many competitive multiplayer games are foregone in favor of longer, more drawn-out battles. But don’t get the impression that they’re slow affairs: Forge’s characters move quickly and attack rapidly, with abilities that hurl projectiles and the characters themselves in many directions, making battles feel like prolonged stays in some sort of insane fantasy combat blender.

Forge’s gameplay is wild and often quite fun, but its tendency to devolve into a mindless frenzy takes away from the experience. If you’re the kind of person who likes to be able to plan out every shot and meticulously dodge or block attacks, it may drive you crazy. The maps--of which there are only four--are mostly small and tight. They encourage team-wide 10-on-10 battles, with individual skirmishes breaking off, raging through corridors, and often lasting long enough to circle back into the main fray.

Players select one of five classes: Assassin, Pathfinder, Pyromancer, Shaman, or Warden. The most important part of the game is the nine abilities that each class has. Using base attacks only gets you so far: Most kills come from lethal, rapid-fire forays of skills unleashed simultaneously by multiple teammates. In this way, the game can feel a lot like a MOBA played in third person, where coordinating strikes with your teammates is the way to win. The core loop of using your basic attacks and then unleashing hell with your abilities is exhilarating, especially with the constant need to dodge or block enemy attacks..

Many abilities follow standard RPG tropes: poisons, stuns, slows, and so on. Others are fresh and inventive--or at least less played-out--such as the Pathfinder’s ability to instantly switch places with a teammate or enemy, or the Assassin’s ability to temporarily transport herself and an enemy to another dimension where the enemy is weaker. While these less-conventional abilities are refreshing, other developers probably would have axed them for being more crazy than fun.

There's no mini-map, and it lends the game a degree of unpredictability. You have to learn the playing fields yourself, and you’ll rarely have much indication if you’re being snuck up on. This allows you to focus on the actual action, not just the corner of your screen, and will lead to moments of genuine surprise. Having the Warden’s axe come crashing down on you unexpectedly is sure to put you at a disadvantage, but because of how durable every character is, it’s not a death sentence. If you’re good, you can still win.

The game’s introductory tutorials are too clunky to be informative: Just hopping in and trying things out is a smoother and easier way to learn. As you play more and more, you receive experience points which can be spent on upgrades for each class. It’s a very basic kind of customization: minor armor upgrades; boosts to speed, mana, or health; new skins; or new abilities that can be subbed into your ninth ability slot. You can feel these things giving you a slight edge over new players, but you’ll never have that big of an advantage. The system adds a layer of progression to the game, but feels half-baked--it simply doesn’t affect anything enough to be meaningful.

Forge is a fun break from the monotony of the same old competitive multiplayer games, but with only four maps, two game types, and an uninspiring progression system, it currently lacks the depth to be something you can fully sink your teeth into. Still, the combat is unadulterated, riotous fun, even if it gets too wild for its own good. Future updates promise a long list of new features, and those are what will determine if the game can stand with the multiplayer heavyweights. Until then, play it, enjoy it, but don’t expect to be consumed by it. Chaos alone only goes so far.