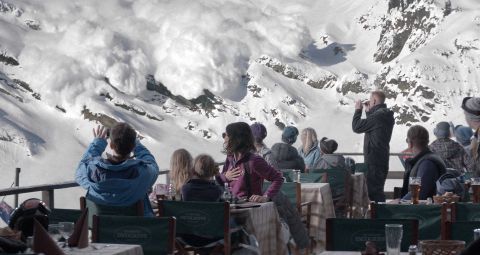 A minor-key appraisal of modern marriage that manages to be funny, sad and, sadly, true – just don’t watch it on your anniversary.

Read previews for Ruben Östlund’s snowbound comedy-drama which swept the board at the Guldbagge Awards (Swedish Oscars) and you’ll be expecting an off-piste The Impossible. But don’t be fooled. Although it features a family tested by disaster, it’s closer in spirit to a euro-centric Woody Allen flick: a brutal and, at times, blackly funny film about a marriage in crisis.

In a near-empty hotel in the French Alps, a Swedish family headed by harassed mum Ebba (Lisa Loven Kongsli) and distant dad Tomas (Johannes Kuhnke) take a skiing holiday together, the elegant rituals of the slopes contrasted wittily with the fraught routines of domestic life. Tomas has taken time off work to focus, for once, on his loved ones but his phone’s constantly ringing, and he and Ebba keep nipping outside to bicker where kids Harry and Vera (Vincent and Clara Wettergren) can’t hear them.

After a scene it would be shame to spoil (involving some incredible SFX), the spectre of catastrophe looms large and relations head downhill fast. It’s not just recent events coming between Ebba and Tomas, it’s the weight of all their years together, and Östlund and the actors build a believable portrait of the petty disappointments undermining long-term love.

They argue in public but don’t raise their voices, pee in front of each other but can’t quite manage to have sex and embarrass their friends (Game Of Thrones’ hilarious Kristofer Hivju, who won a Best Supporting Guldbagge, and Fanni Metelius), who make excuses for them. It’s a little meandering, and a touch too strange for the romcom crowd, but the overall effect is as guiltily involving as overhearing your nice next-door neighbours mid-argument.

A minor-key appraisal of modern marriage that manages to be funny, sad and, sadly, true – just don’t watch it on your anniversary.