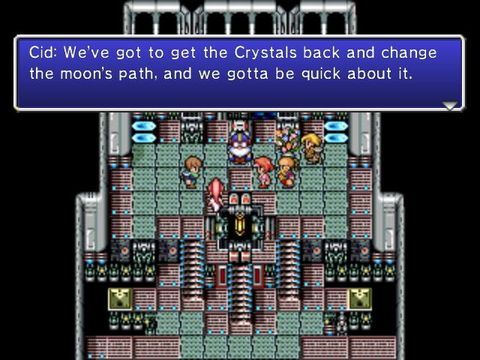 Bah +10! A pox upon Square Enix and their unquenchable thirst for WiiWare micro-transactions, because they’ve gone and hobbled something that could’ve been quite special here. Final Fantasy IV: The After Years is fan service with a smile; less a true sequel to FFIV and more a ‘where are they now?’ update set 17 years after the original. Needless to say, those who enjoyed FFIV will be in their element here. Look at elderly Cid with his little white beard! My, hasn’t Palom grown up? And so on.

Then there are the more subtle touches, such as the gentle remixing of the original’s locations and musical scores, and they way the (tastefully updated) graphics revert to 16-bit form during flashbacks. It’s a touching update that’s utterly awash with heartwarming nostalgia; it’s just a shame that it’s been needlessly spread out over nine different ‘episodes’ totaling 3,700 points. Its heart is in the right place, but we don’t really want to keep shelling out for pints of blood to pump into it.

The initial 800-point outlay will buy you a short (six hours is pushing it) adventure that focuses on the trials and tribulations of Cecil and Rosa’s teenage son, Ceodore, who is training to become a Red Wing. The game design is defiantly and deliberately old-school, but with far fewer spikes in difficulty (a notorious feature of olden-days Final Fantasy games), which means less backtracking and less enforced leveling-up.

The battle system will seem primitive to those weaned on the flashier offerings of today, but there are several largely successful attempts at making it feel more contemporary. These include additions such as the ‘Band’ system which enables party members to combine forces in a similar vein to Chrono Trigger’s Techs, and moon phases that affect the effectiveness of your moves.

Once that’s out of the way you can invest in any one of seven side stories for 300 points a pop, each one concerning a different character from the original FFIV (including Rydia, Parom, Palom and Yang), and each playable direct from the main menu. Every story is independent of the others, which means it’s not necessary to buy the complete set and you can cherry-pick the ones that feature the characters you like the most – or whom you fancy a little bit. This is probably the best way to get value for money from the package, although in order to complete the game outright, you’ll have to splash another 800 points on the game’s final chapter. Surely that’s enough points now, Square?

A good game is still a good game regardless of its price, but FFIV: The After Years’ narrative is needlessly fragmented due to Square’s decision to split the full game up into lots of expensive little chunks. Factor in the fact that large swathes of the story will be all but unintelligible to newcomers, and you’ve got an experience that’s best left for the hardcore.