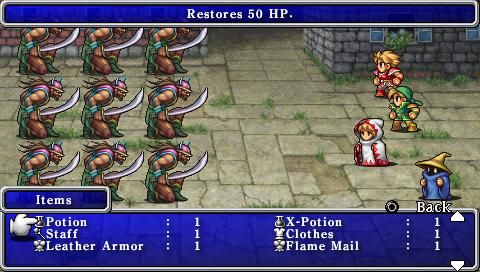 Final Fantasy's 20th anniversary: it's here. In 1987, Japanese gamers were treated to the original entry in the series. We're acknowledging this chiefly because we're forced to cut the company some slack here: this is the fourth remake of Final Fantasy released since 2000. Fortunately, it's also the best.

Let's start off with stuff you don't know. Final Fantasy looks incredibly clear and sharp on the PSP, with bright and inviting graphics that easily outclass all prior versions of the game. You can tell this from the screenshots, but it's just as charming in motion - though character animation is no better than it was 20 years ago. In a similar vein, the game's music has been arranged to sound crystal clear and absolutely flawless, with realistic instruments (it's synth, but good synth).

Gameplay? It's the same as it ever was: pick out a party of four characters and go delving into dungeons, hunting for treasure and enemies. It's a little loose compared to current Final Fantasy games, with exploration more of a possibility. You can get lost in its world, no clue where to go next - this can suck, particularly if you're on the road with no access to online strategy guides. Otherwise, it's basic, basic, basic: turn-based battles almost exactly as they were 20 years ago, simple dungeons and simple puzzles. The game's not so difficult anymore thanks to rebalancing over the years, either.

The lack of a remotely interesting story by today's standards is quite dull if you're used to movie-like epics like Final Fantasy XII. On the other hand, it's less clutter for your mind: you can easily play this game while, say, watching television. You have to have realistic expectations if you're going to enjoy this game at all.

Any improvements that made their way into previous versions of the game are here, too. This includes the updated translation from the 2004 GBA version, as well as its then-new optional dungeons. Basically, this is the ultimate version of the same old 2D, overhead Final Fantasy, spruced up to its shiniest ever.