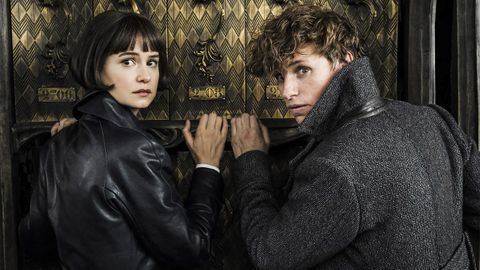 J.K. Rowling is back. As in really back. If 2016’s Fantastic Beasts and Where to Find Them expanded the universe she first introduced with the Harry Potter stories, then The Crimes of Grindelwald takes things not just wider but deeper. Given this is part two of a mooted five-movie series, Rowling - who again scripts - isn’t even halfway done yet.

It begins in 1927, at the American Ministry of Magic, where the dark wizard Gellert Grindelwald (Johnny Depp) had been held for six months since his capture at the end of the original Beasts. He’s had his tongue removed in order to curtail his powers of persuasion, but that doesn’t stop him mounting a dramatic escape. Cut to London, three months later: Newt Scamander (Eddie Redmayne) arrives at the Ministry where his brother Theseus (Callum Turner) works, along with Leta Lestrange (Zoë Kravitz), Theseus’ fiancée.

Sibling rivalry notwithstanding, Newt is there hoping to overturn the international travel ban imposed on him after his role in the events surrounding Grindelwald’s arrest. If talk of such bans brings to mind Donald Trump’s actions at the start of his presidency, it’s not the only time Rowling evokes real-world events. Grindelwald, it transpires, is gathering followers to create a new world order ruling over all non-magical beings.

Key to this is the disturbed Credence Barebone (Ezra Miller), now ensconced in a freak show in Paris as he seeks to find his real lineage. “Desperate for family, he’s desperate for love,” coos Grindelwald, all too willing to exploit Credence’s power for his own ends. But Grindelwald is not the only one looking for him. Unbeknownst to the Ministry, Newt is asked to track down Credence by Hogwarts’ very own Professor Albus Dumbledore (Jude Law).

Fantastic Beasts: The Crimes of Grindelwald ending explained - everything you want to know after watching

Joining Newt is his no-maj friend Jacob (Dan Fogel), who arrives in London with Queenie (Alison Sudol). Jacob’s memories of their earlier encounters have been restored (or “un-obliviated”) but he’s now under an enchantment. Soon enough, they’re all off to France, with Queenie’s sister Tina (Katherine Waterson) also in pursuit of Credence, for an adventure that comes vividly to life in the hands of director David Yates, who relishes bringing ’20s Paris to the screen.

Notching up his sixth Rowling-inspired film, Yates truly understands what makes the Wizarding World work. Each frame is filled to the brim with detail, whether it’s goblins cleaning windows on floating lifts or a contraption hoovering round the Ministry of Magic (well, someone has to do it). Nor are the ‘beasts’ forgotten, from baby Nifflers cheekily popping champagne corks to the beautiful seaweed-skinned Kelpies, some Japanese water demons, and one lion-like creature that can travel 1,000 miles in a day.

And, of course, Potter fans will get a huge kick out of the scenes that return us to Hogwarts, long before Harry et al got to roam its corridors. Heralded by a blast of John Williams’ original score, shots of the Great Hall and classrooms produce a shiver. And it’s beguiling to see Law’s twinkly eyed Dumbledore giving a lesson. Needless to say, this is no nostalgia trip; Rowling has good reason for going back to school – especially when she cues up flashbacks to the time when the picked-upon Leta and Newt were classmates.

Every Harry Potter Easter egg we spotted in Fantastic Beasts: The Crimes of Grindelwald

Yet the film really hits its considerable peak in its revelation-heavy final third, with a showdown at Père Lachaise. In a film about brothers and sisters, surrogate or otherwise, the Beasts family tree gets all the more thorny, as hitherto unknown - and complex - relationships are unveiled. Meanwhile, the leather-clad Grindelwald’s rally - cut to images of world war and even a mushroom cloud - weaves threads to our own Muggle world. It’s not hard to link this bleached-blond madman’s rise to that of the far right. While the original cast led by Redmayne pick up easily where they left off, the newcomers fit in seamlessly. Law is spot-on with Dumbledore, making a character so indelibly played by Richard Harris and Michael Gambon his own. As for Depp, he plays Grindelwald with sinister menace, but never overcooks it. Credit Yates, too, for ensuring darkness is seasoned with light. “I think this might be the best moment of my life,” says Newt, as his brother gets zapped. Even in the bleakest of times, there’s reason to smile.

Find out what else is hitting cinemas this year with our most anticipated upcoming movies, plus the films we think are already the best movies of 2018.

Fantastic Beasts: The Crimes of Grindelwald