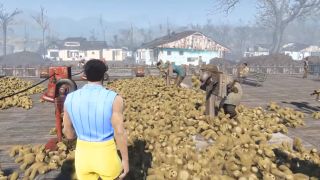 Fallout 4's Contraptions Workshop DLC has been out for nearly a week, so it's about time to check in with the player community and see what bizarre things they've started building. What have all those new logic gates, conveyor belts, and sorting machines let them get up to? Well, Reddit user 50451 doesn't have to butcher their own radstags any more (this uses a mod for the auto-butcher, FYI).

Meanwhile, Fournailsonetounge has created a Build-A-Bear workshop that you should definitely not take your kids to.

Speaking of building bears, Preston Garvey won't let being pelted by dozens of them distract him from important Minutemen business, no matter how Father tries.

This Rube Goldberg device by FluffyNinjaLlama has one very important purpose.

TheBlueFlowerPot is working hard to overcome the post-apocalyptic future's critical shortage of lunchboxes.

And our friends at PC Gamer have created a device to punish Farmer Abernathy for his horrible accent.

Fallout 4's Vault-Tec Workshop DLC is set to arrive next month, which should let players make even more bizarre, scientifically unethical creations to gawk at.