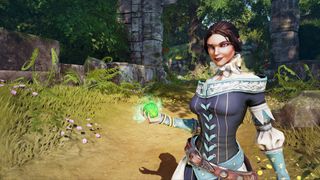 Back in 2012, Fable 3 art director and Lionhead veteran John McCormack came to Microsoft with a full-blown pitch for Fable 4: another RPG set in the world of Fable, but this time running on Unreal Engine 4, with a new Victorian setting, and - in McCormack's words - "the late Victorian proper far out Jules Verne shit".

In McCormack's pitch, which he detailed to Eurogamer, the ever-present Bowerstone had grown into a sprawling-yet-dense London analog. Tram cars and flying machines rumbled through and over the city, while characters inspired by British stories roamed the streets: you might meet a Fable-ized Dr. Jekyll and Mr. Hyde, then follow the trail of a Jack-the-Ripper type who turns out to be a Balverine.

"And that was going to be Fable 4, and it would be darker and grittier," McCormack said. "And because it was R-rated it would have the prostitutes and the humour. I was like, man, this is going to be fucking brilliant, and everybody was really into it."

Obviously that didn't happen. McCormack said Microsoft rejected the pitch as it already planned to switch Lionhead over to making games as a service (Microsoft declined Eurogamer's request for comment). In other words, free-to-play games like Fable Legends - though Lionhead apparently took some time before it landed on that specific project.

So you may wonder why Microsoft didn't let Lionhead go back to a more traditional Fable after losing confidence in Fable Legends, instead of cancelling the game and shuttering the studio. Xbox boss Phil Spencer told us (a week before the news surfaced, as it turns out), that the studio had likely changed too much to go back to "a big single player RPG-driven thing like the Fable of old".