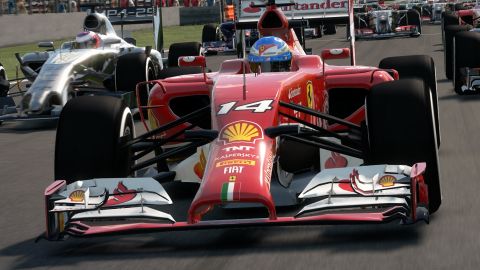 Let's be clear here: You should think of this as 'F1 2013 ver 2.0' (or 'F1 2012 ver 3.0' if you want to be cynical). Codemasters is making a brand new F1 game for earlier-than-usual next year, but this old-gen version is mostly unchanged. Nonetheless, with new and returning tracks, rule changes and tasty team dynamics like Rosberg/Hamilton and Ricciardo/Vettel offering so much potential for gaming fun this year, there's plenty of reason to go for another lap on the out-going generation. So let's fire up the Xbox 360 version and see if there's any more performance left in this old engine.

The driving model is still excellent, blending hardcore simulation depth and nuance with pick-up-and-play accessibility. With all the assists switched off and cockpit cam enabled, it's a wonderfully involved and tactical driving experience. Actually using your wing mirrors (which are oddly low-res on the Xbox 360 version) to keep your rival behind you instead of the on-screen arrow icon is surprisingly fun. And the victory of beating even a minor team goal in a long race is massively rewarding.

The handling is clean and clinical when you treat your grip levels with respect, with cars slotting neatly into racing lines at the right speed. This makes perfect laps look very close to real life on the TV Pod camera, though it's not quite as natural-looking in TV-style replays as it could be. Direction changes look a little too 'digital', but the important thing is how it plays and this ultra-responsive steering makes for a highly rewarding driving experience. The more care you take to drive properly, within your car's capabilities, the faster you'll go.

Last year's feedback from the front tyres has been refined, and tyre-punishing cornering techniques have audible squeals and tangible rumble to let you know you're pushing too hard. It's a clever solution to the problem of not actually having your bum in contact with the car you're supposed to be driving. Even with this hardcore-pleasing finesse, it's noticeably harder to actually spin the car now under acceleration, which should make the game much less frustrating for newcomers too.

Recent F1 games have adopted the 'Young Driver Test' in Abu Dhabi to introduce you to the game's workings. However, this year you start off in a one lap race where the game evaluates how you play and then suggests a difficulty level. However, with all the assists switched on by default, you're probably best off skipping it and setting it to your own preferences, then adjusting the opponent skill level accordingly. It's easy to find a good balance.

The real-life introduction of hybrid engines this year hasn't affected the game much, except to add an annoying turbo whistle to the new, lower engine note, and an 8th gear to the cars if you're playing in manual. That's like a clock striking 13 if you're a long-term F1 fan. But the move away from the six seconds of video game-friendly 'KERS' boost (that have quite coincidentally been available to drivers since Codemasters' F1 games began in 2009) has enhanced the purity of the racing experience. There's still the DRS 'go faster' button to press when you're tailing the car in front, which is a bitch to defend against with KERS taken away. But unlike real life, the game won't penalise you for weaving.

The race weekend plays out in familiar fashion. You can take part in practice sessions and complete development objectives to steadily improve your car throughout the season. There's still no parade lap before the race (surely next year?) and running out of fuel still gives you enough drive to at least get back to the pits. Managing the fuel mixture is sadly the same as last year's lean/normal/rich settings, so there's no call for 'Strat Mode 5'. Pity. I want my Strat Mode 5. No I don't know exactly what that is. The first rule of Strat Mode 5 is that you do not talk about Strat Mode 5. Unless you're Hank Marvin...

Disappointingly, a lot of elements are recycled from last year's content. The pit radio instructions sound mostly identical (and probably are) and some of the post-race sequences remain unchanged from even two games ago. They still do their job and have been dressed up with some better textures and lighting, but the sense of déjà vu is palpable.

At least the genuinely new content is good. The biggest addition is the brand new Sochi Autodrom track in Russia, which is a first for the series and indeed F1 in general. This new circuit may have that slightly sterile 'modern F1 track' vibe, echoing Abu Dhabi in particular, but its clean lines and large grandstands are attractive and the mix of corners offers everything from flat-out mega-curves to a point-and-squirt street section, reminiscent of Valencia. It's a strong addition to the roster.

Two further tracks make return appearances, namely Germany's Hockenheimring and The Red Bull Ring (formerly the A1 Ring) at Spielberg, Austria. Both have been in F1 games before, but it's good to have them back. Bahrain receives a cosmetic change, as it's now a very pretty night race, with countless floodlights rising from the desert into the night sky. It looks like a bit like you're racing on the moon. There is one sad loss, however, with the Indian GP track dropped for one year due to a scheduling predicament in real life. Long story.

Aside from the staple career, championship, multiplayer, split-screen and co-op season mode, there is a return for the challenge mode, which sets you bite-sized scenarios to tackle, each of which is graded on a gold/silver/bronze scale. There's also a welcome reappearance for Season Challenge mode, which sees you choosing a rival and trying to take their seat in a best-of-three contest. With one-shot qualifying and a reduced roster of tracks, this is still one of the best game-ified interpretations of F1 since the days of Super Monaco GP.

But here's the kicker. Last year's game itself was an incremental update over the already-great F1 2012, but there was a load of classic content of cars and drivers from the 1980s and 1990s, which added significantly to the game's appeal and made it worth the upgrade. This year, all those extras are gone. On paper, the new tracks, rules and what-have-you sound like enough to warrant the upgrade, but they aren't.

It's still a stonking racing game. It's more accessible than ever thanks to the slightly more forgiving handling model, yet ready to punish you on the harder difficulty settings. But seeing as it is so doppelganger-similar to last year's game, yet leaves out one of that title's biggest features, there's no question that it's an inferior package overall. Still, despite taking a small step backwards while we wait for a big step forwards, F1 2014 is still demonstrably better than the vast majority of other modern racers and deserves your time. Especially if you haven't played an F1 game in the last couple of years.