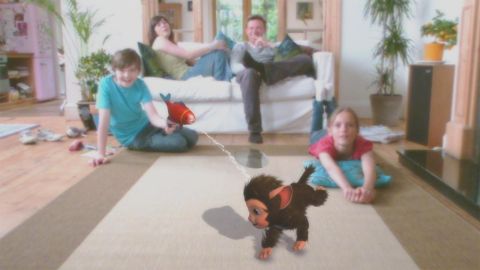 Hot off the mediocre buzz of Eyepet for the PlayStation 3 comes the portable counterpart. The PSP version of Eyepet, much like its older PS3 brother, tasks the player with taking care of an androgynous, but sickeningly cute, monkey-rat-thing. The game takes advantage of the recently released PSP camera in order to virtually superimpose the bizarre little creature into our world.

Hot off the mediocre buzz of Eyepet for the PlayStation 3 comes the portable counterpart. The PSP version of Eyepet, much like its older PS3 brother, tasks the player with taking care of an androgynous, but sickeningly cute, monkey-rat-thing. The game takes advantage of the recently released PSP camera in order to virtually superimpose the bizarre little creature into our world.

Using the camera with the Eyepet works well, and functions similarly to the recently released Invizimals. The game includes a cardboard square that must be placed in view of the camera in order for the Eyepet to show up properly. Once your cardboard square is in place, it’s very simple to rotate your camera around your Eyepet and watch it do cute stuff from all angles. The camera rarely serves a significant gameplay purpose, and many elements of the game can even be performed entirely independent of the camera. The main purpose of its inclusion is to show off the technology, which is admittedly impressive.

Taking care of the Eyepet is incredibly simple and barely required. You can feed it, and you can wash it, and that’s about it. You really don’t even have to clean it if you find subjecting a terribly cute monkey-rat thing to possibly hazardous soaps morally detestable. If the creature had required a little bit more care and attention, then making sure your Eyepet doesn’t die would have been a much richer, emotional experience.

There are games to be played with the Eyepet, but none have even an inkling of depth. Eyepet is really just a series of shallow minigames, centered on an incredibly cute, well-animated mascot. The game never attempts to be anything more than that, but even a little bit of depth would have lead to a much more rewarding experience.

Playing the minigames unlocks new outfits and accessories for your Eyepet, and there are a few different games to choose from. You can jump on trampolines, bowl, look for treasure, go fishing for fish and race cars and boats. Racing the car amounts to circling the vehicle around a small course repeatedly, while the Eyepet clings on for dear life in his 3 mile-per-hour adventure. It’s very cute. The boat racing game has the player using the overused, and incredibly annoying blow-into-the-microphone game mechanic to move the sailboat around a similar small course. Blowing into the microphone can be substituted with hitting the X button, which you will do, very quickly.

You do have the ability to draw your car and your boat, but the creative options are so limited, that it is difficult to even see your design reflected in the finished product. It’s a neat little showcase of technology (and cute) to see the Eyepet draw what you drew, but the payoff is disappointing.

The game is made for children, and they will enjoy it. The technology is very cool, there is quite a bit to unlock and the Eyepet is so cute that we wouldn’t be surprised if it started showing up in ads for unrelated games like the Raving Rabbids tried to do for a little while. These are all elements that can be overlooked by an admitted hardcore gamer in the interest of a qualified recommendation, but one element that cannot be overlooked, and one that hinders the game throughout is the preponderance of excessive load times. Every action requires an absurd amount of computer processing. Bringing the Eyepet into its house, selecting mingames, and even directing actions within the games are all subject to crippling load times. Just to offer a bit of perspective, from booting up the game from the cross media bar, to loading your save, to getting to a point where you can finally interact with your monkey-rat can take up to three minutes.

Load times can be a frustrating distraction, but rarely a deal breaker. The problem with the load times in Eyepet though, is that the game is designed to be played in intermittent bursts. You should be able to load up your game, feed your Eyepet, maybe wash it depending on your shampoo stance, go fishing, and then put the Eyepet to bed. Eyepet is not a game meant to be played for more than 20 or 30 minutes at a time, and when half of that is spent waiting for the game to load, you will start getting horrific flashbacks to the install sequences from Metal Gear Solid 4.

Eyepet is an impressive little showcase, but the limited use of the camera for anything other than getting a good look at your Eyepet really gives the game the stink of expanded tech demo. You may think the smell comes from refusing to shampoo your Eyepet, but it’s not, because you’re Eyepet is not a physical being. Sorry to ruin the illusion. The game is adorable, and for patient children (nearly none of them) who like cute things (almost all of them), it will be an enjoyable experience. For others though, there simply isn’t enough here, and the wait times between the limited offerings are unacceptable. Eyepet has to learn, that in the real world, you can’t get by on looks alone.