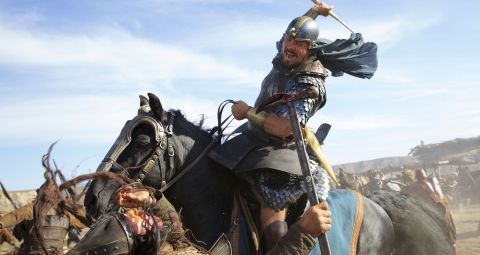 After dusting off the swords-and-sandals sub-genre with Gladiator in 2000, Sir Ridley Scott now has a crack at reviving the Biblical epic. Such movies were big, in every way, in the '50s and '60s, when pictures like Ben-Hur, Quo Vadis, King Of Kings, The Ten Commandments and The Greatest Story Ever Told regularly ran between two-and-a-half and four hours, their vast desertscapes rendered in widescreen, CinemaScope and VistaVision to tempt viewers away from their 4:3 TV screens. Scott, aided by CGI though many sets were constructed, has conjured a vision to make Cecil B. DeMille quake. But that much was expected. The real surprise here is just how savage and uncompromising the action is – viewers planning to escape to the cinema on Boxing Day might discover that the in-laws weren’t such a hazardous proposition after all.

Exodus: Gods And Kings opens in the city of Memphis on the western bank of the River Nile. It is 1,300 BCE, and Moses (Christian Bale) and Ramses (Joel Edgerton), though not related by blood, have been raised as brothers. The former is a general in the Egyptian military, the latter the son of the Pharaoh Seti (John Turturro), but their strong bond is torn asunder when it is discovered that Moses is of Hebrew descent. Floated down the Nile on a basket of bulrushes when Pharaoh decrees all newborn Hebrew boys be killed to guard against the prophecy that a Messianic leader will free the slaves, he was taken in by Pharaoh’s daughter and raised as family.

Exiled to the desert, Moses marries and has a son but is jolted from his humble existence as a shepherd when God speaks to him through a burning bush. Told it is his fate to rescue his people from Egyptian rule and lead them to Canaan, Moses employs his military skills to train up the Hebrew slaves in a pulse-pounding montage. A war of attrition begins, with God escalating the carnage by unleashing a series of plagues on Egypt.

For those who vaguely remember the Book of Exodus from obligatory RE lessons or hours spent in Sunday School, Scott’s film might come as a shock. This is blood-and-thunder stuff pumped with monstrous egos, Old Testament morality and cold-blooded violence: the body count accrued by Ramses, Moses and God himself makes the Expendables trilogy look like a hymn to pacifism.

Watching the vast battle scenes, it is easy to see why Scott took the gig: horses charge, chariots clatter, swords and shields clash, burning arrows (that old Scott favourite) arc through the air, cities burn. Then come the plagues: the Nile gorged with blood, flies blotting the sky, a Magnolia x 10 army of frogs hopping upon Memphis, locusts threatening to explode the speakers while performing a devastating flyby. And on top of all that, a darkness moving across the land so immense as to make Roland Emmerich’s spaceship-shadows in Independence Day look like manhole covers. And there's still the parting of the Red Sea to come. Exodus: Gods And Kings, it transpires, is a proto-action movie, a proto-disaster movie and even a proto-superhero movie – ridiculous as it sounds, there are echoes of Bruce Wayne in Moses’ journey from tragic victim to saviour of the helpless.

Of course, no amount of spectacle would wash if the performances weren’t in place. And while some of the support roles are a little camp (Ben Mendelsohn’s viceroy, Hegep, is pure Life Of Brian) and others underdeveloped (Aaron Paul’s Joshua looks on a lot, says next to nothing), the bearded Bale and bald Edgerton have faces carved from the arroyos of the Almeria Desert where much of the action was filmed. When it comes to being leaders of men, these guys are, thankfully, closer to Russell Crowe’s Maximus Decimus Meridius than Orlando Bloom’s Balian de Ibelin (Kingdom Of Heaven, lest you’ve understandably forgot), and no amount of frocks, headdresses and guyliner can chip away at their gravitas.

Scott’s reading of the Book of Exodus will undoubtedly attract nitpickers and naysayers but that was always going to be the case given the contradictory theories of theologians, historians and archaeologists – and he can always point at the rock monsters in Noah. Better to view Exodus: Gods And Kings as a bold adventure in genre filmmaking, supersized to the point that Gladiator’s recreation of the Coliseum no longer seems like such a big deal.