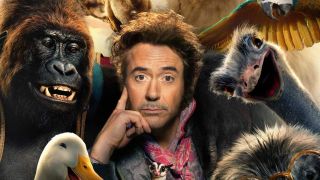 Despite spending much of his time conversing with animals, the good doctor's not prepared for a mauling quite like this. The first Dolittle reviews are in, and there’s a lot to go through. The CGI, action sequences, all-star voice cast – including Rami Malek and Tom Holland – and Robert Downey Jr.’s Welsh accent are all in the sights of Dolittle reviewers. We’ve rounded up some of the best (and most brutal) down below.

Ultimately Dolittle is not just a weak story, badly told, but a puzzling waste of talent. (The only silver lining? A relatively fleet running time.)

Despite the good the picture attempts to put into the universe, there’s much more that drags it down. The sheer volume of crass flatulence jokes and routines involving animal nether regions should get youngsters in the audience laughing, but will just as assuredly make the grownups groan. Once the film wears out jokes with dog Jip (voiced by Tom Holland), discussing butts and scooting on the floor, you’d think the film would’ve reached its capacity. But no, there’s still more in store, as the film stoops to include a disgruntled tiger (Ralph Fiennes) getting kicked in the crotch and a dragon (Frances de la Tour) getting an enema.

There are moments when Dolittle threatens to become something more willfully perverse or at least distinguishable – Marion Cotillard’s revolutionary fox suggesting she should kill a child with the help of Selena Gomez’s friendly giraffe, a stick insect spying on Jim Broadbent, Downey giving Frances de la Tour’s short-tempered dragon a colonoscopy – but they’re regrettably fleeting and we’re soon back on the forgettably straight and narrow. It’s ultimately a miracle that despite the tortured production process, Dolittle can most generously be described as passable for young, undiscerning viewers. It won’t charm or amuse you particularly but it’s not a catastrophe, the highest praise I can muster.

The problems are manifold, but let’s start with the most tragic one: Downey, a delightfully inventive, generational talent who has been borged into the Marvel machine for the past decade-plus, seems determined to sabotage this movie. His rapid-fire delivery, his self-aware energy, his ability to win over an audience, should have been ideally suited for this character, but he undoes any potential goodwill by opting for an ill-advised and half-hearted Welsh accent which occasionally (and I’m assuming inadvertently) slips into Irish, Indian, and Jamaican intonations.

That’s typical of the film’s humor, which reeks of after-the-fact punch-up prompted by negative test-audience feedback. That is to say, Dolittle is full of anachronistic pop culture references and poop and fart humor, jokes delivered in suspiciously low-impact style by the film’s animated animals. Occasionally, a bit pops up that’s specific to a particular species, like the scene where Dolittle escapes the jaws of a man-eating tiger by waving a mirror like a laser pointer. These are actually lightly amusing, as is Michael Sheen’s over-the-top performance as Dolittle’s sworn rival, the sputtering incarnation of medical mediocrity Dr. Blair Müdfly