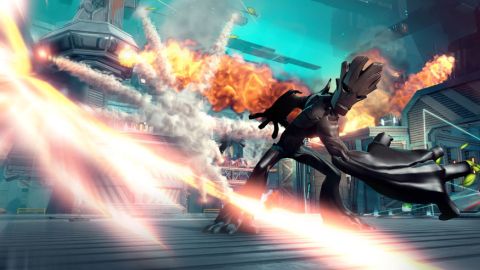 The latest entry in the ludicrously profitable toys to life genre, Disney Infinity 2.0 gives you a bunch of physical toys, a video game, and a plastic base to act as the interface between the real world and the digital. It's stupid easy to set up--plug the base into your console of choice, plop one of your plastic toys on top of it, and watch as your real-life action figure gets virtually displayed on your television. It's absolutely a gimmick, but it's one that looks and feels like pure wizardry, even after so many games have pulled off the same trick.

Avalanche Studios has done a much better job this time around of differentiating each of the figurines by giving them unique powers and full skill trees to unlock. Meaning: Iron Man gets to fly and laser blast his way around Manhattan while Spider-Man gets his trademark web-slinging and Spider-Sense abilities. Though many superheroes share a few basic powers (increased damage, more health, and the like), they do have some key unique traits--playing as the raging Hulk is a very different experience from running around as the lithe galaxy guardian Gamora. Because of this, Infinity 2.0 makes a bigger case for running out to the store and snagging every plastic toy available right freaking now than 1.0's bland carbon copies ever did.

In the first Disney Infinity, you couldn't make, say, Jack Sparrow run around Monsters University and pelt people with paintball guns. Nope, cross-overs were strictly relegated to the open Toy Box mode. Disney Infinity 2.0 is a little more lenient, if only just. Cross-over tokens are strewn about each Playset. Collect them all, and you unlock the ability to let the Hulk run free in Spider-Man's Playset, or Rocket Racoon in the Avengers Playset. It's not an ideal solution, but it makes things feel less limiting than they were in the first game.

It also makes a whole slew of welcome changes and additions to Disney Infinity. Instead of dealing with multiple types of currency for individual item unlocks, everything is earned by spending the blue sparks you collect from fallen enemies and hidden capsules. In regards to the Toy Box (a mode that lets you flex your creative muscle and build your own worlds), you won't have to play roulette to randomly unlock the items you need to build semi-functional levels and games like you did in the original Disney Infinity. Simply head to the Toy Store (an in-game place where you obtain new items), and choose the item you want. It's not perfect; items are dispersed on huge grids, and must be unlocked in sequential order, which creates a seemingly arbitrary gating system. Still, at least the starting line of your race track isn't held hostage by pure luck.

Best of all, your Toy Box creations, figures, and power discs from Disney Infinity 1.0 will make the leap to 2.0 intact, even giving your old figures brand new skill trees to work through. 1.0's Playsets don't make the leap, however, so if you want to sail the Caribbean, make sure you keep your old game handy. The focus here is clearly on the Marvel Universe, as the first three Playsets available revolve around The Avengers, Spider-Man, and Guardians of the Galaxy. Disney fans looking for more unique adventures and additional figures based off their favorite cartoon franchises are going to have to wait until November to get their fix--and even then, they'll only be able to use them in the Toy Box.

Speaking of, the Toy Box in 2.0 lets you create interiors and join Toy Box levels together to create even bigger worlds, making for a much deeper creative experience than before. But actually building those levels is still a time-consuming, convoluted mess, with so many different tutorials, item categories, and button combinations required to even get a handle on the basics. Still, all of the tools to make some impressive looking worlds and fully-featured games are here--even if the controls for actually playing them aren't quite up to snuff.

While many improvements have been made in 2.0, the core experience remains the same--including its awkward combat, boring, repetitive quests, and obtuse controls. In the original, The Incredibles Playset was a barren wasteland filled with nothing but fetch and "defeat X enemies" quests. The included Avengers Playset is three times larger, but just as empty and just as bland. In fact, it's so big that--unless you're using a character who can fly--you spend most of your time trying to find a vehicle so you can slowly drive your way to each objective marker. Not exactly fun.

Movement in general isn't much fun either, as Disney Infinity 2.0's controls suffer from having to simultaneously accommodate so many types of play. Trying to point your car in a straight line is an exercise in futility due to the fact that vehicles handle like they're driving on a surface made of butter. But that's a minor complaint compared to how Disney Infinity 2.0 handles jumping. Many characters have the ability to fly, super jump, or swing from web to web, and Disney Infinity 2.0 maps all of these powers to the same button. Hold down jump, and you'll use whatever superpower your hero is capable of. Simply want to jump? Hopefully you don't hold the button down too long, otherwise your hop will cause Thor to hover in the air. I can't count how many times I've botched a crucial leap because of this. It's infuriating.

Combat is also stiff and awkward. Enemies are damage sponges (unless you've spent the requisite skill points to unlock your figurine's increased damage buffs), and combat requires zero skill outside of button mashing. Not only that, it's just not fun to play as many of the superheroes. Thor's combo wind-ups leave you wide open to counterattacks for seconds at a time, Iron Man is surprisingly weak considering he wears a suit made out of, er, iron, and while Black Widow's moves are quick to pull off, she can't fly, so getting around town is a pain. That's all in addition to the general clumsiness of how your characters lock on to their enemies, a frustratingly unreliable experience all its own.

Worst of all, Disney Infinity 2.0 only comes with the one Avengers Playset, and there just isn't enough variety in its missions and modes to make it worth buying on its own. With the first Disney Infinity, if you didn't like The Incredibles, you at least had the vastly more entertaining Monsters University and Pirates of the Caribbean Playsets included in your Starter Pack. Not so here: if you want to play in Spider-Man's (whose city is more or less a carbon copy of The Avengers') or Guardian of the Galaxy's different worlds, you'll have to shell out extra money to get access to them. The included Toy Box Games (included Power Discs that feature smaller, focused mini-games) give you an RPG-lite dungeon crawler and a tower defense game to play. They help soften the blow of the lackluster quality of The Avengers Playset a bit, if only for the surprisingly decent dungeon crawler. Unfortunately, the tower defense game is just as clumsy and awkward as everything else.

If there's one thing Disney Infinity 2.0 is good at, it's finding new and inventive ways of parting you from your money. Sure, you can get by with the starter pack, which includes a handful of gorgeous action figures and the Avengers Playset (a self-contained, linear story-driven experience). But if you want to take control of Captain America, or dink around Knowhere as Rocket Racoon, be prepared to drop real-world dollars for what amounts to on-disc paid DLC. Luckily, the toys look genuinely cool, with each of Marvel's iconic heroes designed to look like a cross between a cartoon show and an action figure. Add in blind packs of Power Discs that do everything from give your hero added boosts to unlocking new items in the Toy Box, and Disney Infinity 2.0 can be a very expensive proposition, indeed.

In trying to be every kind of toy to every kind of kid, Disney Infinity 2.0 ends up biting off more than it can chew. It wants to be the ultimate Marvel playground while still trying to cater to its Disney fans, and ends up leaving fans of Mickey Mouse by the wayside. It wants to be a massive hand-crafted adventure that provides a sprawling set of tools for budding creators, but nothing feels intuitive or well-designed. And while 2.0 makes each figurine unique in its own way, Disney Infinity has a long way to go before it becomes the ultimate toy it wants to be.