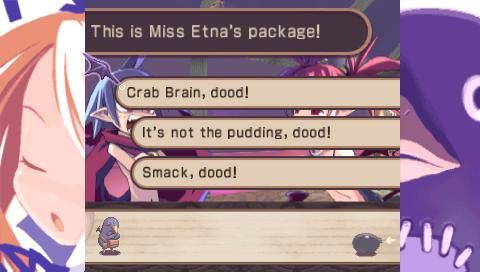 The Disgaea series has spawned three major titles, along with a slew of spin-off games, since its first appearance on the PS2. Seven years later, Nippon Ichi has expanded this quirky series with their new action-novel adventure, Disgaea Infinite.

Leaving its tactical RPG roots at home, Disgaea Infinite plays as a text-based story that unfolds by progressing through the different characters’ narrative dialogue and interactions. Unlike most of the Disgaea titles, you play as a Prinny, an enslaved penguin-like species of the netherworld with “dood” Tourette’s. Your job is to prevent the assassination of Lord Laharl by a mysterious pudding to ensure your salary is kept within the equivalent range of a minimum wage employee from hell. Like we said, this game is quirky.

Throughout the game, you will make use of time traveling and two spirit powers (possession and mind-control) to uncover the 13 possible outcomes. Possessing a character allows you to follow his perspective through the story while mind control enables you to manipulate the actions of that character during specific pivotal moments in the changing plot line. Using both of these mechanics, you will time-loop through the story to unravel who is behind the mysterious pudding.

Sadly, these major elements of the game are also the most confusing to manage. It is very possible to wind up trapped in the same scene multiple times before figuring out the right combination of who to possess and how to respond when given the option to control their mind. Once you've realized a wrong plot path has been taken, you must wait for the assassination of Lord Laharl to reoccur before time traveling back to the beginning hours of the story and trying a different route.

To help quell the confusion of where characters are at different stages of the story, the game does offer a timetable to keep track of their locations during each of the nine-hour windows. However, more could have been done to assist the player with tracking the flow of the story, including a more detailed chart of the routes already taken. We found it easier to skip over this feature and rely on our clever, in-game wit to solve the mystery and prevent the Lord's death-by-pudding assassination. Just be prepared to suffer through the same line of dialogue every time you travel back to the first hour - and it can get annoying.

The animation of the game is nicely detailed, but if you expect your PSP to shell out sub-PS2 graphics, this game will sorely disappoint. With the exception of a few cut scenes, all the characters are 2-D animated and have only a few different expressions. What is even more upsetting is the game's limited setting. You would think a giant castle in a place called the netherworld would have dozens of rooms, hallways, torture chambers, etc., but the developers seemed to have been on a tight budget, considering there are only a handful of dull sceneries in which the story unfolds.

Devoted fans to the Disgaea franchise will feel oddly at home with the game's unpredictable dialogue, overly crazy plot and familiar line-up of characters - many of whom make an appearance in this virtual action novel - but if you're not invested in game's history or its characters, this title is passable at best.