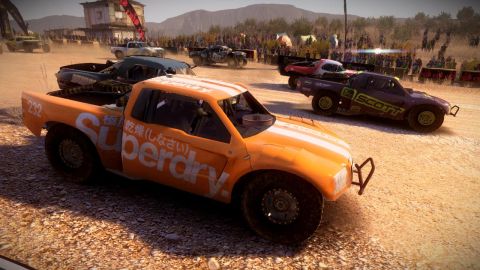 What you've got here is essentially Race Driver GRID torn from the tarmac and thrust into an ultra-competitive off-road environment. This is a Very Good Thing because not only is GRID one of the best-looking games ever made, it's also one of the most enjoyable racers we've ever played.

Picking up where McRae left off, the new 'names' and much oftheinspiration behind Dirt 2 are flamboyant thrill-drivers likeKen Block and Dave Mirra. The influence of these extreme drivers on the ethos of the game has resulted in a massive leap over the original DiRT, which now looks tame by comparison.

It's a natural progression of the series that reflects the late ColinMcRae's real-life careerwhich had been moving away from familiar point-to-point stages of the WRC and taking in more spectacular off-road disciplines likethe Race of Champions andParis-Dakar Rally.We've put together a video to show how effectively the game embraces the dynamics of modern motorsport (and tried to do some Ken Block manoeuvres on the way).

The game starts you off with a few races and a smattering of vehicles to choose from, gradually unlocking stages and throwdown challenges as you progress, until you're competing in the X-Games, World Tour events and eventually a special race series against Colin's family and friends.

Events are accessed via an inventive front end 'hub' - an impressively-rendered and authentically grease-caked motorhome, complete with a TV that shows real music videos. It's a shame the game forces you to come back to this trailer between races (a simple 'next event' option would have been welcome) as the pause for loading is long, though well masked with stats, freeze-frame photo transitions and information on your progress towards achievements.

Above: The view from your motorhome, not exactly picturesque, but authentic

Front-ends? Menu screens? We know what you're thinking. This is all well and good, but what really makes this game so damn special?