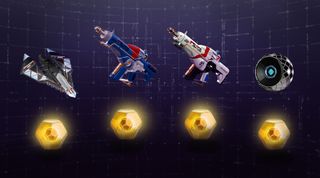 Destiny 2 Twitch Prime rewards are on the way. As Bungie and Twitch announced today, Twitch Prime members will receive six lots of Destiny 2 Exotic items over the next six months.

Before you can grab the loot in-game, you'll need to claim it on the Destiny 2 Twitch Prime page. From there, you can pick it up from Shipwright Amanda Holliday in the Tower. As long as you claim the rewards via Twitch Prime, you'll still be able to collect them in-game even after the current Exotic loot expires. However, you won't be able to claim previous loot. So if you join Twitch Prime on February 26, for instance, you'll miss the first drop.

Each month will feature a new set of four Exotic items which could include weapons, ornaments, ships, emotes, Ghosts, or Sparrows from previous seasons. The first gear drop is out now and will remain available until 10am PST / 1pm EST / 6pm GMT on February 25.

Here's everything in the first Destiny 2 Twitch Prime rewards drop:

Based on our testing, Exotic weapons obtained through Twitch Prime rewards will drop at your current Power level. They don't drop at Pinnacle Power, but they may still boost your overall Power level depending on what level your weapons are.

Note that you can still claim your Destiny 2 Twitch Prime rewards even if you already own everything in the drop. If nothing else, it's free Legendary Shards, and again, you may get a Power boost out of the deal.