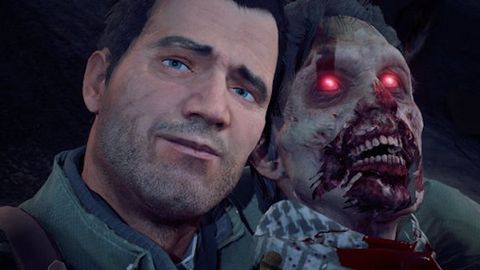 Not always thrilling, but Dead Rising 4 feels like the series getting its sense of fun back. And that's a great thing.

"Frank West is back!" That's the tagline and promise of Dead Rising 4, and it represents more than you might think at first glance. This isn't just about the return of a character - it's about the series getting back to its roots after Dead Rising 3 took a brown-and-grey-tinted turn for the serious. And in that objective, DR4 succeeds. This is the closest a Dead Rising game has come to feeling like a proper continuation of the wackiness that defined the original.

First, a little disclaimer about that "Frank is back" business. He is and he isn't. The character Frank is back, and he has the same smartass-with-a-heart-of-gold personality he's always had. His lines are funny without being obnoxious, and he comes across as lovable anti-hero. He's not there to save the day, but he might just do so anyway, because underneath all the sarcasm we know he's a softie. However, Frank's got a new, more handsome look (no more receding hairline or bulbous nose), and voice actor TJ Rotolo has been replaced. It's a bummer that we'll never get another line reading quite like the infamous "I've covered wars y'know," but the new Frank is still worth cheering on.

Now, onto the real star: the Willamette Memorial Megaplex. Here, you can take laps around a go-cart track, fire cannons off a pirate ship, explore an indoor jungle, go food-tasting in a medieval village, and go window shopping for the next great weapon to use against the undead. Maybe you'll find a stuffed dragon that baps harmlessly off a zombie, or maybe you'll discover a sledgehammer, or an assault rifle.

It often feels like everything and anything is at your disposal, regardless of how (in)effective it may be. And that's a great feeling; to walk into a store and see a dozen or more icons light up, begging you to grab them, makes you feel like a kid in a toy store. Especially when you're in an actual toy store and start lobbing foam darts at your enemies. Sure it may not do much damage, but that's the point. The point is to be silly, to be wild and not take this whole zombies-are-eating-everyone thing so seriously.

But if you do want to be combat effective, there are options. Combo weapons can be crafted from the debris you find around Willamette, provided you've also found a blueprint that teaches you the right formula. So if you find the blueprints for a sword that freezes zombies solid, you can craft it next time you come across nitrogen and a machete in your travels. No hoofing it back to a safe house, no scavenging for extra materials - you become some sort of shop class wizard and just make it there in the field.

Every combo weapon oozes personality in its design and feel. Whether I was swinging a sledgehammer attached to propane tanks - creating mini-explosions with each hit - or shooting live swordfish into my enemies' chests, I was excited and giddy at trying each new weapon. There are loads of them to try out, and seeking out blueprints becomes something of a treasure hunt, encouraging you to leave the mall and explore more of Willamette.

The game's story, likewise, will soon push you out of the tourist trap that is the Megaplex and into the town proper. Unfortunately, like a conventionally attractive teen running from a zombie in a horror movie, this is where Dead Rising 4 trips and stumbles.

Willamette is a bore. It's sleepy Colorado suburbia, with cottage houses and a small main street with mom-and-pop businesses. And while its depiction may be accurate to what a small town would be, it's not the most exciting setting for the zombie apocalypse. The overall map is divided into multiple sub-sections, but I honestly couldn't tell you any major differences between any of them other than one is slightly more residential, one is slightly more industrial. The game takes place near Christmas, but I failed to notice any particularly festive decor on the streets other than the odd set of colorful lights.

It's a strange and disappointing turn of pace to go from the mall - where there's an abundance of weapons and toys to play with, all within a few feet of each other - to the drab township of Willamette, where everything feels spread so far apart that I suspect the vast majority of my overall kills came simply from driving to and from objectives. I often longed to return to the bright and colorful mall, but only rarely did the game direct me there. Instead, I started to memorize streets as the game bounced me back and forth across the same few locations.

Dead Rising 4 is the first in the series (aside from the Wii port of the original) to drop the timer system, which forced you to complete objectives within a constantly diminishing time limit. This is a fantastic improvement, letting players devote more effort to exploration and making their own fun. But gone too are a few other staples that fans may miss.

The weird and terrifying bosses that defined the world of Dead Rising have been reduced to optional side quests, and none of them have their own cutscenes or sense of personality that previous maniacs had. So I'm sorry to say there will be no chainsaw-juggling clowns, no disgruntled postal workers that toss homemade bombs, no bondage fetishists with flamethrower penises (and yes, those are all real bosses from previous games).

Gone too is the reliance on stationary save points. Combat can still get hairy and dying will set you back, but the ability to save anywhere and a gracious autosave system keeps Dead Rising 4 from having that classic horror game fear of "oh god, where is the next save point". It's a more casual, easygoing entry than its older siblings.

The trade-off is that you feel more free to play around with the many, many toys Dead Rising 4 gives you, and it's not so intimidating to explore your environment. That switch in feel, going from a tense horror game where you could lose tons of progress any minute to an open-world adventure where you're encouraged to look under every nook and cranny, may feel strange.

I encourage you to stick with it, because it's a shift that works well for the series. And since there's so much more to do in Dead Rising 4 (by the time credits rolled I'd barely cleared more than half of its challenges) it's definitely to completionists' benefit.

It feels like for every upside Dead Rising 4 has going for it, there's a bit of a downer. The story is much tighter and more focused, at the expense of the colorful psychopaths of previous games. The timer has been removed, making exploration more enjoyable, but that kills any a sense of tension. Frank is back, but he feels a bit more focus-tested and generic. However, Dead Rising 4 succeeds more than it fails - and when it succeeds, it does so in ways that feel significant.

This is a series finding its way back to what made it memorable, and there are going to be some growing pains. Dead Rising 4 takes the first steps in course correction by making the zombie apocalypse fun and silly again, while also giving the series a fresh batch of new ideas.

Not always thrilling, but Dead Rising 4 feels like the series getting its sense of fun back. And that's a great thing.