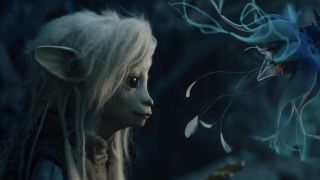 The Dark Crystal: Age of Resistance is so close you can almost hear the Skeksis disgustingly demolishing plates of grotesque food. A second trailer for the Netflix series has been released, teasing the incredible new adventure from the Jim Henson company. Watch below.

On the side of evil, voicing the Skeksis, are Harvey Fierstein, Mark Hamill, Ralph Ineson, Jason Isaacs, Keegan-Michael Key, Ólafur Darri Ólafsson, Simon Pegg, Andy Samberg, Benedict Wong, and Awkwafina. To top it all off, Sigourney Weaver will narrate the 10-episode series, which reaches Netflix on August 30.

Keep an eye on GamesRadar for our review of The Dark Crystal: Age of Resistance. To read more about the series, it's worth picking up the latest issue of SFX magazine, which features a huge feature on the new Netflix series.