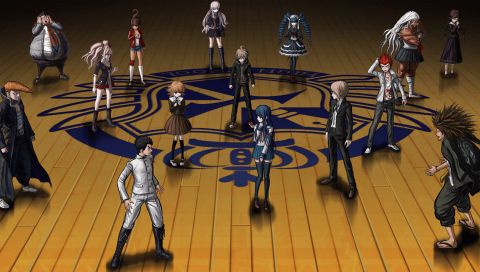 High school’s confusing enough as it is. Between avoiding the “wrong crowd,” trying to find yourself, and scrounging together a decent education with massive classes, belligerent classmates, and the woes of being halfway between adolescence and adulthood, it’s pretty hectic. Imagine throwing some murder mystery into the mix: “Sorry, Mrs. Smith, I couldn’t finish my math homework because I narrowly escaped impalement via sharp objects during dinner.” This is the exact sort of scenario presented in Danganronpa: Trigger Happy Havoc, a visual novel that tells the sometimes-gruesome tale of high school life gone wrong. Harrowing? For sure. Entertaining? Definitely.

The plot follows the créme de la créme of high school students (“Super High School Level,” as they’re called) imprisoned in Hope's Peak Academy, the nation's most elite high school. Here, they're under the maniacal rule of the malevolent half-evil, half-angelic Monobear. The only way to escape? Graduation--which, in the eyes of Monobear, means murdering another student without getting caught. You fill the shoes of Makoto Naegi, a student who’s just been chosen to attend Hope’s Peak. The tale unfolds from his perspective as you attempt to find your way out of the academy with your sanity (and life) intact. Cue a mixture of fear, trepidation, and mistrust that grows between the captive students as they scramble to prevent killings. The endlessly entertaining plot blossoms into a gleefully sadistic journey, pushing you to power through chapter after chapter to see what happens next.

Much of Danganronpa unfolds via interaction with other characters; back-and-forth dialogue exchanges compose the glut of gameplay as you uncover the mysteries from within Hope's Peak Academy. Character interactions are often spirited and hilarious, with cheeky one-liners and plenty of bear-related puns that give a lighthearted vibe to what could've otherwise been far too disturbing speech. With key players being killed off left and right, it needs that kind of balance, and the English script does a great job of providing it. Best of all, where most visual novels are content to throw wall after wall of text at players, giving little incentive to continue beyond the branching dialogue choices, Danganronpa makes excellent use of a variety of different play styles to keep up the momentum.

The first of these you encounter are Phoenix Wright-esque segments where you explore crime scenes in a first-person point of view. This perspective gives the game a bit of a claustrophobic feel, emphasizing the hopeless mood that permeates the academy walls as you gather important evidence and testimonies against a possible culprit in a murder case. Finding enough clues eventually leads to a Class Trial, a set of fast-paced mini-games that put your skills to the test.

Each mode of play in a Class Trial is a rapid-fire battle of wits as you point out relevant evidence to each character's testimony, "shoot down" letters to reveal clues, debate against other students in a rhythm game of sorts, and build comic strips depicting what you believe to have gone down in each case. Where the visual novel segments are at times too passive and overly wordy, Class Trials are an impeccable exercise in getting the blood flowing. They're as punchy as Danganronpa's neon-hued pop art, which is devilishly good at complementing the grisly deaths the students eventually succumb to.

Unfortunately, the anime-styled artwork doesn't look as attractive in-game as it does in cutscenes. The character models are 2D paper cut-outs akin to Parappa the Rapper, and this presentation removes a bit of the tension when you take a step back and see how ridiculous the models actually look. Luckily, the English voice acting is competent and matches beloved characters like Junko perfectly, slightly offsetting the bizarre artwork. If you prefer the original Japanese voice acting, though, you can select it as the default language, a welcome feature Otakus will be pleased to see.

Danganronpa is an accomplished amalgam of storytelling, character interaction, and deduction. It’s got an involving (if silly at times) plot to ensure you’re ensnared from the very beginning, several mini-games that make trials and evidence-gathering events worthwhile, and a macabre attitude that isn’t afraid to show its true colors. There’s a reason this niche Japanese favorite has had its praises sung several times over on forums like SomethingAwful and Let’s Play circles: it’s brilliant, and a franchise that we'd like to see more of. It is, what you might call, Super High School Level Fun--let’s just hope the same audiences who supported the Japanese release get behind this one too.